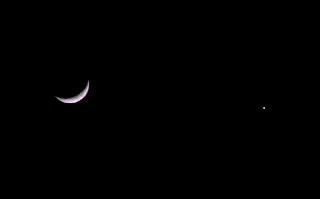 I saw a beautiful "wet moon" tonight; the crescent moon is tilted on its side. It looks like a bowl, or a smile. If you are in the Northern hemisphere and the sky is clear where you are, why not go and have a look at the wet moon? As in the photo, Venus is quite close by the moon tonight.

I used an astronomy website to make the following sky map. You'll need to know your latitude and longitude to get an accurate map for your position, but thanks to the wonders of the internet it's very easy to find that out too. I used this latitude and longitude finder. If you plan on a bit of stargazing tonight, you could print off a star chart for your own location so you know what you are looking at. 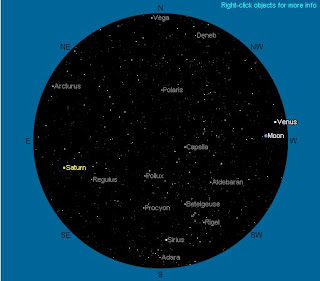 In October or November my dad ordered me a kit from Marshall's for growing potatoes in bags. His intention was that I would have home-grown potatoes for Christmas. But the kit only arrived a week or so ago, so today Steph and I planted them up, with some help from Eleanor and Rebecca.

You put about 8" of compost in the bottom of the bag then put three chitted spuds on top and cover with about another 4" of compost. Keep it watered, and as the shoots appear you cover them with more compost until the bag is full. I've had friends who used this method and they were amazed at the size of the crop. They told me the bag is just jam packed full of potatoes by the end.

The kit came with three bags and fifteen Swift seed potatoes. The instructions said to put three spuds in each bag, so we jabbed some holes in the bottom of a half-empty compost bag and planted that up as well. There's nothing magic about the bags that Marshall's sent me - you can grow spuds in any sack or bag or bucket of roughly the right size. The only "magic" is that receiving a kit through the post gave me a kick up the behind to actually do it. Thanks, Dad.
Posted by Melanie Rimmer at 12:05 pm 27 comments:

Allotments All the Rage

The BBC is reporting that allotments are all the rage. A combination of the credit crunch and eco-awareness is driving a huge interest in vegetable growing. National waiting lists for allotments are said to be over 100,000. According to the BBC:

In some areas, it's more difficult to get an allotment than it is to get in to the most exclusive London clubs, with waiting lists running to 10 years - those that have not been closed altogether.

In order to feed the demand, the National Trust is releasing enough land for 1000 allotments. What caught my eye about the story though was a link to Landshare.net. With a strapline "Linking people who want to grow their own food to space where they can grow it", it struck me as a brilliant idea whose time has come. The ubiquitous Hugh Fearnly-Whittingstall appears in a video on the site explaining how the idea works. Or at least that's that it says - I couldn't get it to play. But from what I can gather it seems to be encouraging people to offer their underused gardens in exchange for some of the produce.

So if you can't get an allotment why not sign up to the Landshare website and see if anyone near you has a garden you could use to grow some produce? Or if you have good intentions to do something with your garden but you never seem to actually do it, why not offer your land to someone who desperately wants it? You get to see your garden looking cared-for and productive. You get a share of some of the produce. You get to build up relationships with people in your local community. It's a real win-win arrangement.
Posted by Melanie Rimmer at 9:04 am 25 comments:

Back to the Allotment

Ed and I went back to the allotment today for the first time in 2009. We were almost scared of what we would find, and it certainly looked weedy and neglected when we got there. But we harvested some leeks and some borecole (a curly cabbage-related thing). And we found most of the weeds were shallow, surface-rooted things which came up very easily. In an hour and a half we had cleared about an eighth of the whole plot, which is very encouraging.

I'll go back later in the week and plant something in the ground we cleared. Broad beans and garlic can go in at this time. And we'll return once a week to clear a bit more. By the time spring really gets started we should have it all shipshape.

I enjoyed myself enormously. I had forgotten how much I love going there. It helped that it was a beautiful day. The sky was blue and the sun was shining, although there was an inch of ice in the water butt. But after only a short while of digging we had stripped off our layers of woolies and were in our shirtsleeves. I chatted to one of the allotment holders who filled me in on what had happened since I was last there. I took stock of what is still there - my soft fruit bushes, my apple tree, the rhubarb is already coming up and so are the daffodils. Ed and I planned what we would plant in the coming season.

It's good to have dirt under my nails again.
Posted by Melanie Rimmer at 5:31 pm 17 comments: