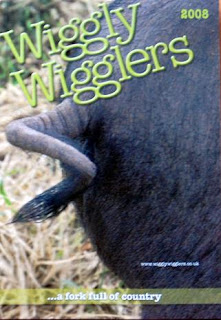 Wiggly Wigglers have a new catalogue out, and it's a bit unusual. I came across WW years ago and still think of them as "The people who sell bird seed and ladybird houses and whatnot" - but goodness how they've grown. You can still get your nest boxes and composters from them, but now you can also get seeds, tools, books, clothes, eco-cleaning products, trees, sprouters, preserving supplies and all sorts of other things. Their new catalogue is over 200 pages long, and it's like the biggest funkiest garden centre you could ever wish for.

But this new catalogue is also more than that. Heather Gorringe is an astute user of new media: the Wiggly Wigglers website, podcast, blog, Facebook group, and Heather's personal blog (subtitled "One womans journey around the World - with the aim to shake up farming using Web 2.0 and Social Media") are all testaments to that. The new catalogue blends contributions from bloggers, customers and celebrities such as Hugh Fearnley-Whittingstall in a scrap-book style. When it plopped through my door this morning I stood in the hallway to flick through it, but eventually had to go and make myself a cup of tea and get more comfy. It's not a catalogue you "flick through". It's so full of articles, features and columns it's more like a magazine. It's actually a good read.

I think what excites me most about the new Wiggly Wigglers catalogue is the beekeeping and poultry-keeping equipment. Having to track down suppliers for those sorts of things can be daunting, I know. To make them available in a catalogue such as WW which has a much broader appeal must sow a seed in lots of people's minds that they could do those things too. I think I might have taken the plunge into chicken and beekeeping much sooner if they had been presented as just normal gardening activities, alongside feeding birds and composting scraps.

What I just wrote isn't strictly true. What excites me most about the new Wiggly Wigglers catalogue is the short piece Heather asked me to write for it about growing your own salad, which is printed on page 57. I don't expect you be particularly excited about that, but I bet you'll be excited about the rest of the catalogue.
Posted by Melanie Rimmer at 2:02 pm

When I saw your heading I thought this was going to be a post about The Wiggles :) Way to go on the growing salad article!

Argh! No! Not The Wiggles! Thank God my kids have now grown out of that phase. But you just had to go and remind me, suzanne. Now I'll have "Henry the Octopus" going through my brain all day!

I hate you, Mel

It was suzanne that started it!

It's not just the customers who are excited about the new catalogue - the staff have been waiting to buy the new products!