Put a Plug in it Challenge Results 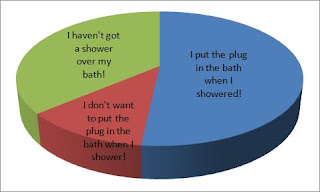 July's challenge was to put a plug in the bath whilst you shower to see how much less water you use in a shower compared to a bath. It only really applied to people like me who have a shower unit over their bathtub. So I was really surprised to see that it got a good response. 58 people took part in the poll and the results were as follows:

I much prefer a bath - & have been telling myself for months that it really does not use much more water. So, I felt quite bad when I took up your challenge, put the plug in & had a shower. The water did not get above my ankles! A converted showerer..

Some commenters shared the inspiring ways they recycle their bath and shower water. Carol Hague keeps a bucket in the bathroom and uses bathwater to flush the loo. Linz uses a bucket to take it to the garden, and Wulf also uses it in the garden via a droughtplug. Yellow washes her whole family of four in a single bath (I think they take turns rather than all go in at the same time) and Amy likes to get in and out quickly. Rob isn't satisfied with taking just one green challenge, but he has done a whole bunch of them and wrote a roundup of the challenges he has taken in the last few months.

There will be a new challenge for August coming soon.
Posted by Melanie Rimmer at 10:00 am

I intended to mention it at the time of the original challenge post, but you can further reduce the amount of water that you use in the shower by using an aerating shower head. I use one, and there is no discernible difference in washing capacity.

My only method (apart from the kettle) of heating water is via an immersion heater which heats half of a large tank of water in the airing cupboard. This is somewhat expensive, but I don't have the money at the moment to spend on a new boiler. I make hot water go a bit 'further' by running a bath once a week and flinging the younger children in one at a time. For the rest of the week they, like the rest of us, have showers.

I sometimes manage to save a bit of money on hot water if I've been away somewhere with the children: on the way home we're often on a motorway. Motorway service stations often have showers freely available for tired motorists...

Fran (the cheapskating (but clean!) motorist)

I heard Janey Lee Grace saying on the Steve Wright Show that she had a timer on her shower....

I've done that once before and the bath got fuller than if i have a bath. Hmmm.

Thank you very much for sharing.
Through your blog, a lot of people including me of course have a chance to read and learn from.
I have read some of your post and I really enjoyed reading it.
And if you want to learn chinese,please visit at
http://www.chinesepal.cn/first/learn-chinese/index.htm
Thanks again and looking forward for more of your posting soon!