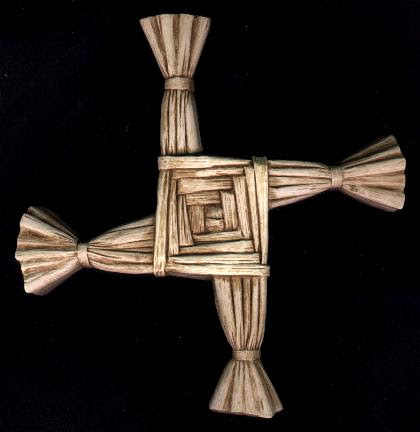 Did you know today was an important day? It is St Brigid's day, also Candlemas (the feast of the presentation of the Lord), also Imbolc in the Celtic calendar. There are a number of traditions and superstitions about this day. For example if snakes or badgers come out of their dens on this day it is considered a sign that spring will come sooner rather than later (an older version of the American tradition of Groundhog Day). In parts of Ireland young girls make a Brideog, a corn dolly representing St Brigid (who is also the Celtic goddess Brigid, the personification of Spring) and make a special bed for her to lie in on St Brigid's Eve. On St Brigid's day they carry her from house to house where the married women give them gifts of food or money. It is also said to be the day the Cailleach, the hag personification of winter, collects her firewood. Legend says if she plans to make the winter last longer she will make the weather fine on this day so she can collect plenty of wood. If the weather is foul she is asleep because winter is almost over and she doesn't need any more firewood.

Why so much superstition about this one same day? Well it is a cross-quarter day. It is half way between the longest night (the winter solstice) and the spring equinox when day and night are equal. If you think of the solstice as mid-winter and the equinox as mid-spring then today must be the start of spring.

Well here in Cheshire it is very cold today. So cold that I drove Ed to work in the car because it is too icy for his motorbike. But I have seen the very first signs of spring beginning to show, such as shoots of daffodils and crocuses starting to push through the earth and some of the trees just beginning to bud. The days are getting perceptibly longer - the mornings are just that little bit lighter and the evening comes a smidgen later.

I have lit a fire and a candle to mark the day, and I plan to spend the day making crafts. I think I will incorporate imagery of St Brigid, the goddess Brigid, the Cailleach, light, fire and spring into my crafts. And maybe spring will come sooner rather than later and this cold, cold winter will be over.
Posted by Melanie Rimmer at 10:24 am

Thanks for this Mel. I'd never even heard of St Brigid.

1st Feb is my birthday and I was unaware of all those facts, so thanks for that!

St Brigid's Day is considered the first day of Springt over here in Ireland. Along with Patrick and St Columb, Brigid is considered one of the patron saints of the country.

Hi Melanie - I'm an occasional reader of your blog - I didn't know about St Brigid and will look her up... I've been using your duck soup recipe for several years, now and really love it. So sad that I wasted so many carcasses, previously. Hope the weather's warmer, there! Cheers

I have never heard of this day either... thanks for the info.

Me too. Never heard about that...
Cheers, Martina

What a great story! I love to hear about old English traditions.

Hi Melanie,
I hope you've just been too busy gardening to blog. It was great to see you'd started back up again. Never commented before but just wanted to say hi.
x