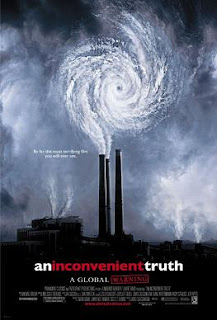 I finally got round to watching An Inconvenient Truth last night. It's everything it's cracked up to be. If I say it's a 90-minute long lecture you won't want to watch it, but oh boy, I wish lectures were like this when I was at college, with shorts made by the Futurama team, jokes that are genuinely funny (unlike the jokes my lecturers made, and I'm afraid probably the jokes I make in my own lectures) and gripping movie clips.

I love the way Gore argues that acknowledging and acting on the reality of man-made climate change is not a political issue, it is a moral imperative. And I love the way his message is one of hope. At the end of the movie is a fabulous sequence - he has just convinced his audience (if they had any doubt before) of the reality and the seriousness of the problems we face. Then he lists all the amazing achievements of humanity - we fixed the hole in the ozone layer, we defeated fascism, we brought down communism, we ended the cold war, we put men on the moon, all by international co-operation. Illustrated with a montage of newsreel clips and probably accompanied by stirring music (I wasn't concentrating on the music), it makes you feel gosh darned proud to be human. Really. And then he mentions that we already have all the technology needed to solve climate change too. The only thing lacking is the political will to do so. The credits roll, listing a score of ways you can help - all simple like writing to your MP, changing your lightbulbs, or encouraging others to watch the movie.
I encourage you to watch the movie, especially if you still have any lingering doubt about whether man made climate change is real or not. It doesn't beat you around the head with stuff you've heard already. There was much in it that was new to me, and I consider myself fairly well-informed about this topic. It genuinely takes on the concerns of the sceptics and answers them. It's also entertaining. And it's on Sky Box Office (the pay-per-view section of Sky) at the moment, or you can search for cinemas showing it.
Posted by Melanie Rimmer at 8:51 am

"we fixed the hole in the ozone layer"

A bit simplistic perhaps. It would be more accurate to say it's not fixed yet but we've stopped doing the things that were causing it, and it should be completely fixed in about 50-60 years. Look at http://news.bbc.co.uk/1/hi/magazine/6449059.stm
for a little bit more detail, or http://www.atm.ch.cam.ac.uk/tour/index.html
for everything you ever wanted to know about the hole in the ozome layer.