Interview with Andy and Dave from Selfsufficientish.com 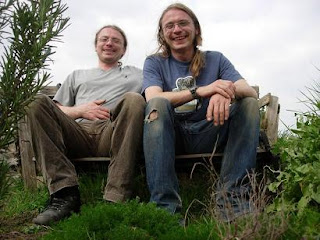 One of my favourite websites is selfsufficientish.com, the fabulous online resource for urban self-sufficiency run by twin brothers Dave and Andy Hamilton. They both agreed to answer my questions about self sufficiency.

Bean-Sprouts: How did you first get interested in self-sufficiency?

Andy: As a child I remember making nettle soup and picking blackberries. We also had some apple trees in the back garden and a small veggie patch. As I have got older it has been more about asking myself "Can I do that instead of buying it?" When the answer is yes - whether it be growing my own veggies or making a fridge - then I will give it a go. For me it is about under-consumption, trying to live as gently on the planet as possible. Food miles make up for a lot of the carbon emissions and by growing my own and promoting growing your own I believe this can make a difference to the amount of fuel used.

Dave: My childhood experiences were of course very similar to Andy’s. Not long after living at home I moved to a house with rhubarb and nettles growing in abundance in the back yard. The garden was tiny but I was still amazed by the amount I got from these two crops without having to do very much (not even sowing the seed). Some years after that I experimented with growing some herbs then branched out to growing potatoes. The following year I was living in Oxford and had my first full size garden veggie patch. Despite the garden being over shadowed by trees on all sides I got a bumper crop of carrots, courgettes, parsnips, potatoes and in the following spring purple sprouting broccoli. This soon got me hooked and I launched into a two year experiment of growing the majority of my own food. This was a partial success as I managed to put something on the table every day for a year. Since then I have always grown something and am constantly improving my wild food knowledge.


Bean-Sprouts: What are you totally self-sufficient in?

Andy: I am totally self-sufficient in some herbs such as chives, rosemary, parsley and fennel. This year I am going to up the ante and introduce some more of the lesser grown herbs such as hyssop and chervil.
Last summer I was almost totally self sufficient in vegetables. My food bill for myself and my girlfriend was around £5 a week. It would have been well into the springtime this year if my freezer had not packed up, although I still have beetroot both stored and pickled and a load of jam. I am moving towards self-sufficiency in booze also, with a brew on the go almost all of the time and some stored up. I would say that every week of the year I have something that I have grown. I hope to store a lot more this year so that every meal I can have at least one thing on my plate that I have grown. I also tend to forage for mushrooms and other wild foods. If I find the time I dry my mushrooms, which keep for about a year.
It depends on what you call self sufficient for other areas in my life as I cook all my meals from scratch, own a bike not a car and mend clothes instead of buying new ones. I intend to make a solar hot water heater and solar ovens when the weather picks up. I hope to be self-sufficient in hot water for washing up and for some meals as a result.

Dave: It depends on the time of year for me. By the end of this month (March) I will be self-sufficient in salad greens and this year have planted enough fruit to be self-sufficient between at least June and October. This is my first year on my allotment in Bristol so all going well it will be from summer this year then ongoing that I will be self-sufficient in most of my food. I decided not to buy seed trays this year as I am recycling old yogurt pots, mushroom and drinks containers for my seedlings so I am also self-sufficient in those. Similarly I would have made enough compost to be self-sufficient in that soon. I intend to build a shed from scrap material at the allotment and will be harvesting rain water from the roof for my crops. I’m also reusing my bath water at home in my third floor flat for my seedlings.
A handful of other things myself and Andy do to be a little more self-sufficient (or self-sufficientish)
· A by-weekly forage in Bristol (sometimes more often in mushroom season)
· Both of us own a solar phone charger
· My desk top computer is made from salvaged parts.
· Andy makes bikes from salvaged parts
· Making own cleaning products
· Re-cycling and re-using everything possible!

Andy: No real goal as it were; we just wanted to share our experiences with others. I guess the closest to a goal would be the ideology of selfsufficientish, which is to reduce your impact on the planet by doing as much yourself as you can.

Dave: I very much saw the website as something that went hand in hand with what I wanted to do. My eventual goal has always been living in a self-sufficient environment and I saw the website as a way of sharing what could be done whilst living within the constraints of every day life. At the time I was a student living in a shared rented house and as most students are I was completely skint. Rather than let this limit me I decided it would be good to share the experiences I had in my chosen lifestyle. It was also a virtual way of sharing ideas.


Bean-Sprouts: What advice would you give someone just starting out in "greening" their lifestyle?

Dave: Don’t look at all the things you can’t do and let it put you off but see all the things you can no matter how small they might be. The first easy example that is always used is to change your light bulbs to energy savers as this is a sure fire way to cut down on carbon and reduce your electricity bill. Other tips are to put backs on your curtains to conserve heat, re-use your bath water in the garden or with houseplants, grow your own salad leaves or herbs on a windowsill. In short try and see what you do from day to day and see if there is a greener alternative – there usually is if you look for it.

Andy: I could not agree more with Dave on this question. Although I would add don’t fly to the list. I am off on holiday to Germany soon by train – my girlfriend is flying and I shall meet her there. I am not saying this makes me a better person, if I was some kind of eco-saint then I would not even use the train and instead cycle everywhere. I do think that we fly too much and even if you don’t think that man is changing the climate, flying still pollutes more than a train does.

Andy: We have just recently signed up with Hodder and Stoughton to write a book. It was not what we intended when we first started, but is very welcome. We hope that we can extend our message to much wider audience. We hope that it will be a book that you will be able to turn to whenever you want to do anything selfsufficientish. So it will cover topics from jam making, foraging and vegetable growing but also cover ethical shopping and how to make do and mend. We don’t want it to be another book that tells you that you are living your life un-environmentally, its not going to be written to give anyone a lecture. Instead we hope that people will be inspired to make small changes that make a real difference. We hope it to be the book that every selfsufficientisher, in fact everyone, will find invaluable. If you live on a small holding and have tons of spare time or in a bedsit and work all the hours God sends then you will find something you can do in this book. The book is called the selfsufficientish bible and is out in May 2008.

Thanks a lot, Dave and Andy. Good luck with the book, I'll look forward to that coming out.
Posted by Melanie Rimmer at 7:43 am

Also one of my favourite sites Mel, can't wait for the book. How true - don't worry about what you can't do (for me that would be solar panels) and just concentrate on what you can do. Every little bit helps.
Jill

Love the idea about watering plants with washing up water - solves the risk of my houseplants dying from drought - now I water something in my house with garden every day after I finish washing up. It almost motivates me to keep on top of the dishes.