It is Easy Being Green 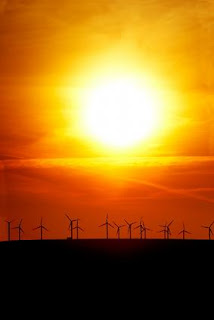 Switching energy supplier is as easy as clicking a few buttons online. It doesn't involve any workmen or digging or moving your electricity cables. It doesn't mean changing your meter or any appliances or any difference at all to the service you receive.
I like to picture it this way: The National Grid is like a great big reservoir of electricity, like a reservoir of water. There are lots of different electricity suppliers pumping electricity into the reservoir, and lots of users (like you and me and businesses and industries) taking electricity out.

All electricity is the same so it doesn't matter if it all gets muddled up.

You can choose whether you are a customer of "Dirty Old Coal-Fired Electricity PLC" or whether you are a customer of "Nice Clean Wind Energy Inc". But either way you take electricity out of the big reservoir (the national grid). The difference is that your chosen supplier will measure how much electricity you took out, and they will put the same amount back in, either from a coal-fired power station or from a wind farm (or nuclear power station, hydroelectricity farm, or a number of different options). Then they bill you for what you used.

This is an oversimplification but I don't think it's a bad one. I'm looking forward to being corrected by your comments, though!

Please visit the uswitch website and spend a few minutes investigating the options for changing your electricity supplier. This is really easy folks - even easier than changing to low-energy light bulbs or not leaving your TV on standby or all the other challenges we've ever had. I'm asking for five minutes of your time to slash your carbon emissions forever. Don't forget to vote in the poll in the right-hand sidebar wen you've done it.
Posted by Melanie Rimmer at 7:12 am

Are you sure you haven't signed up as an affilliate marketer for uswitch.com?

Mel, that was pretty bang on, the way you described how the industry works. Did you see the BBC news this morning with the article about a biofuel producer, using supermarket waste (lorry loads of cabbages, even salmon) to feed his pigs, then using the pig slurrey to generate electricity using the heat it generates when decomposing, and the waste from that process is used as fertilizer on his corn/barley (can't remember for sure) fields. The electricity generated is enough to power 1000 homes.
The owner was saying that it's only in the last 2 years that this has become financially viable but that initial investment in the technology is usually required in any new business. He also said that vegetable oil was a good feed for producing the high methane slurry required. Imagine a contract with McD's for all their spent cooking oil! He never went on to say what they did with the pigs - sell them for pork them I suppose.
I can't find a link yet on the BBC website, but it was a very informative article.

For once, Mel, I think you've missed the point. When the grid was privatised, different suppliers bought different parts of the generating infrastructure; some companies bought the renewable bits of it. The grid as a whole gets about 4.2% from renewables, and growing.

The electricity companies' implication is that if you're on a green tarriff, they input as much extra renewable energy into the grid as you use (making your use effectively "green"). But this isn't the case. In reality, the companies generate as much power as they can sell to the grid at any given time, period. So your decision to go on a "green" tarriff makes no difference to the power generated - it's still 4.2% renewable, and nothing has changed unless the supplier is bringing new renewable plant onstream with your money.

And there's the key; most of the companies offering "green" tarriffs aren't doing that. They inherited renewable plant when the industry was privatised, but they're just maintaining it. To make an actual difference, you need to look at the spend per customer on new renewable generating capacity.

Here are the various companies offering green tarrifs, and their spend per customer on new renewable plant in 2004.

See the con? Hard to believe, but take a look at the full article I used for this here;

http://www.theecologist.co.uk/
search for "ecotricity"
read "green electricity... are you being conned?"

Yellow, I saw the piece this morning regarding the bio fuel producer I thought it was great until I saw the pigs being kept on wire mesh flooring so their manure could be collected - seemed a bit nasty to me how do the pigs rout about and do piggy things ? I also wondered what they do with the pigs when they have finished with them, I don't think they could go into the food chain due the fact they were being fed meat products(the reporter was waving a bacon sandwich) Defra will not allow these animals into the food chain due to contanmination, after the foot and mouth episode, you are not legally allowed to feed kitchen scraps to pigs in case they have come into contact with meat products.
Still a good idea though but as with anything some questionable aspects

I see your comment about the mesh floor, and about DEFRA's restrictions about animal feeds. I know little or nothing about animal rearing, so it was great to get informed feeback like that.

Hedgewizard - your comment got me worried! Our electricity is supplied by Green Energy, which (on our tarrif) is 100% renewables. According to the table in your post taken from the ecologist's article, they don't invest at all, however on their website it states that 'Currently 50% of our energy comes from newly commissioned facilities that were not in operation when we launched the business in 2001. '. This contradict's the ecologist's guy's info so I'm not sure how reliable the rest of the info is that he has relied on from his source website. (hope all that wasn't too confusing!)

The whole generation and supply of electricity to the grid in the UK is a bit weird, and it could do with a rethink. I don't know all the ins and outs, just that it is complicated! I used to work for a company that created substation control systems, so we worked a fair bit with NGC, and whenever the subject of selling electricity to the grid came up, I always came away with a sore head!

Anyway, if there is a demand for green energy, then more green energy will be produced. If you buy green energy from a supplier, then that supplier has to prove that they have supplied that much green energy to the grid. In that way, the 'bad electricity' that is needed from coal etc stations will be reduced.

Getting back to the Ecologist's article, so what if the actual electricty that comes down your wires is from the coal station next door. The wind farm 100 miles away will be supplying Mrs Jones her electricity even though she is not on a green tarif. It all balances out in the end. (It's that big resevior analagy of Melanie's).

Thank's for making me think about things though!

Suzanne - the figures from the Ecologist are only a snapshot for 2004. I agree it's difficult to see a complete figure, but take a look at some more recent figures; Green Energy didn't invest a penny in 2005 or 2006 either. You can see those more recent figures at www.whichgreen.org.

The 50% new capacity claim is made because they buy energy from other producers - especially small ones - but they have not made any new investment themselves since 2004. They're in negotiations to build some wind turbines, apparently, but that's it.

Don't get confused about the "reservoir" thing - we're all using grid energy (4.2% green) regardless of what tarriff we pay for. What matters is how the profit element of what you pay is spent. The big difference is that ecotricity has no shareholders - all their profits are reinvested in the company. Green Energy, btw, says it "aims to reinvest 50% of its profit". Perhaps they're saving up?

"Anyway, if there is a demand for green energy, then more green energy will be produced." I'd love to know how this works, if not through building new green generating capacity!

Hope you don't mind me poking you about this, but I used to be a Green Energy customer too until I realised they were just brokers for capacity generated by other people - which is fine, but if they don't invest then they're not changing anything!

That's great, Hedgie. I already knew some of the things you said but other parts of it were new to me. I'll definitely check out the article in The Ecologist, and I'll see if I can find any more recent figures as well.