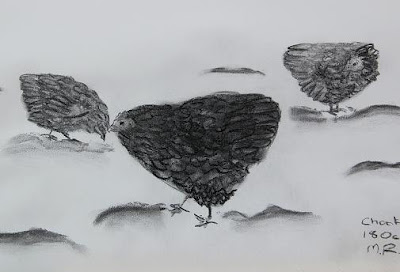 On Saturday I spent some time in the garden sketching things in charcoal, including the chickens. They all seemed fine. On Sunday I got dressed up in old jeans with holes in them, an old faded t-shirt, marigold gloves, headscarf and wellys (with a fetching cow-skin print) and went to clean out the chicken coop and run. It's a mucky job, and long overdue this time, but satisfying. I spotted one of the new Rhode Island Reds lying in the run, apparently dead. She moved a little when I went to investigate, but shortly afterwards she did expire.

I don't know what was wrong with her. She had seemed fine the day before. All the other chickens are healthy and well except for a mite infestation, which is why I went out to clean the housing and treat it. Anyway mites on a chicken are like fleas on a dog - they're annoying but not lethal. There was no sign that anything had got into the run or harmed her. She was only 18 months old.

We have two older chickens, both hybrid layers, which we got at the same time and have always got along well with each other. Then we got two Rhodies in January, and they were pals with each other but the older girls bullied them a bit. Well whilst I was cleaning the hen house, the surviving Rhodie went over to her dead sister, lowered her head to her and made soft clucking noises. I don't think we should anthropomorphise animals (anyway, they don't like it), but it was impossible not to interpret it as saying something like "Elsie? Are you OK? Elsie, what's the matter? Get up!" And she pecked at the dead bird a couple of times as if prodding her to move.

I buried her at the back of a flower bed. I might pop a few spring bulbs on top later.
Posted by Melanie Rimmer at 9:33 am

Sorry to hear about your lost hen...You did exactly the right thing, in my opinion.

I read in an animal welfare training booklet that family pets should be allowed to smell the corpses of dead co-pets. Then they know why their friends are no longer around.

We used this tactic last year when our canary died suddenly. I wrote about it here:

It's always heart breaking to see an animal go. Might just be a chicken, but we do get attached to them. Sorry for your loss.

aw, I'm sorry about your hen! The Rhode Island Reds were my grandma's favorites on the farm.

p.s. Your sketch is wonderful!

It's lovely to see you back, with another skill to your creative bow!

I am sorry that she passed. Life throws unexpected things. Best wishes, Sue in Washington.

Sorry for your loss!Then they know why their friends are no longer around.
http://gwb-chinese.blogspot.com/

I do like the new comments layout by the way. Very useable.

Oh, I'm so sorry you lost one of your young RIRs. Poor thing.

I love your drawing.

That's so sad! Sorry to hear it!

That charcoal drawing of your chickens is wonderful.

Sorry that your henny died. Before we left Somerset I had 2 hens die suddenly ~ 1 was fine & running around, 5 hours later she was dead ~ both these hens were young & none of the others were in any way ill. I've had chicks get very upset when their "special friend" chick has died, despite the other chicks from the hatch running around.

My friend has just fostered the 2 incubator hatched chicks I had with his henny & she's loving being a mother. Now I need a foster duck mummy

Your sketch is wonderful.