Sorry I didn't post yesterday. I haven't vanished again. But my sister Steph has arrived for a visit over half term. We've been learning to draw in pastels (well I've been learning, Steph is already very good at it), decorating the house for hallowe'en, shopping for our brother-in-law Andrew's birthday presents (happy birthday Andrew!) and generally having lots of fun.

Since it's Sunday, here are some funnies:

After an exhaustive three year study, scientists at the University of the Isle of Dogs, East London, (UIDEL) have discovered what they think could be the real cause of global warming - people all over the world hanging out their washing to dry writes special washing correspondent Barry Rooster.

The boffins say that when freshly-laundered clothes - especially whites and light coloureds - are hung on washing lines, they reflect the sun's rays upwards, leading to an increase in the greenhouse effect.

Head of Research Gunther Smallpiece comments: "We've previously been told to reduce the temperature on our washing machines to save electricity, but this is fact counter-effective. We will recommend to the government that the population use the full drying cycle on their machines, instead of hanging the garments outside in the fresh air". And he goes further: "This is so serious, we'd like to see hanging washing outdoors to be banned in the same way as smoking indoors.""We'd like to see it become, if you like, a 'hanging offence'!", he jokes, proving conclusively that even dull scientists do have a sense of humour.

Cartoon from Throbgoblins. Click on the panel to read the whole strip. 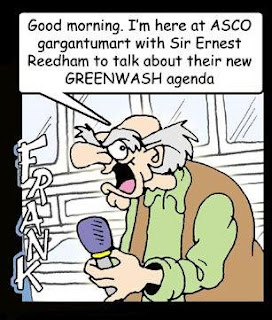 Posted by Melanie Rimmer at 1:46 pm

Finally! I'm saving the world through being a goth!

I only have two washes: dark and darker...

how did you do all this cool stuff to your page? i can't do that on my blogger :( anyways what im really trying to say is nice site man haha