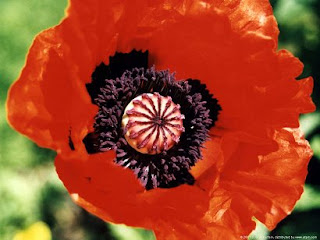 Today is the 90th anniversary of the end of the First World War. On Sunday I attended a remembrance service at Poynton church. My 7-year-old son, Sam, was there with his beaver scout unit, dressed in his uniform and marching in the parade. Inside the church a young local man who had just returned from Afghanistan spoke about his experiences. As we all stood by the war memorial for the two minute's silence at 11am, I watched the cub scouts shivering in their shorts and wondered what they made of it all. I think perhaps in a world where they are mostly pestered by their parents to wrap up warm, they must at least have understood that this was something important. Important enough that hundreds of people gathered on a sleety November day to shiver together with heads bowed.

I stood in remembrance services as a child myself. I knew what they were about. Well, sort of. They were about The War (we still say "The War", as if there was only one war. As if war is now over. As if). They were about the Men Who Died (and the men who lived, and the women who died and lived). Ah, forget it, I didn't really understand at all. When I stand in remembrance services now I look at my sons shivering in their scout uniforms, standing next to boys who look hardly older in their army uniforms, some with medals already on their chests. And I shiver too.

But I still don't understand. I haven't been to war. Nobody I know personally has been to war whilst I've been alive. I try to imagine what it would be like if my children joined the services and went somewhere like Afghanistan or Iraq. I understand more now than when I was a child, but I still don't really understand.

I hope I never understand. I hope my kids never go to the front. I hope we will soon bring our boys home from Iraq and Afghanistan. I hope we learn to quit meddling with other parts of the world - we only ever make things worse in the long run. I hope we use our brave servicemen and women to defend our own country if need be and to do peacekeeping services around the world, but not to make war. I hope we equip them properly for that job, and repay them properly for their service, take care of their families properly and take care of them if they are injured. I hope Britain never starts a war again, and I hope we never again join the cause of a nation that starts a war. This I hope, and I pray.
Posted by Melanie Rimmer at 9:26 am

Great post Mel. Although I wasn't born until the 50s, my parents were in their late 30s when I was born, and my father fought in "the War".
Well actually he didn't fight, he was in the Army Film and Photographic Unit (his C/O was Alan Wicker), but that doesn't mean he was not in danger.
He used to tell us stories, but they were funny anecdotes, heavily sanitised for us children.
I remember one day though, I can't recall how on earth it came up, he spoke of how you get used to the the very distinctive stench of rotting bodies. You end up being able to eat nearby.
I thought afterwards (years afterwards) that getting used to it must be a worse horror than not getting used to it.

Great post Mel. I was born in the late '60s and like you I didn't understand as a kid and probably haven't much more understanding now.
But I remember the mother of friends of mine crying openly in church on Remembrance Sunday. My Mum explained that her both her brothers and her father had been killed in "The War".
As this lady was usually incredibly reserved and shy, seeing such an open display of sorrow made a lasting impact on me. I can never hear the word 'war' without thinking of her, sobbing as the bugle played.
No matter what rhetoric I come across about war, conflict and 'rights', her sorrow is the only real legacy I ever see or feel.

I have often experienced conflicting emotions at this time of year when we remember those who gave their lives in conflict. I was brought up a pacifist (although I often shout and scream at the tv when the news is on). However, which I also pray that my children never enlist as a career, I feel grateful to thise who have lost their lives in defence of our country. How about those who lost their lives in conflicts I feel were ill advised at best? Well, when you join the armed forces you don't get to choose which conflict you're sent to. Either you're a soldier, or you're a civilian. So, my gratitude encompasses those men and women too. I can pray for the souls of the pawns of each war, whichever side they find themselves on. But I may refuse to observe two minutes silence after the death of those whose hands manipulate those pawns.

Southern Ireland is only just starting to admit to & commemorate the First War (first?), which, having been brought up in England, I find odd. I studied 20th century history at O level, then was heavily involved in research for "Oh, What a Lovely War" ~ O level drama practical, only to watch the film of the play in Guernsey with the women who helped me when my son was fighting to live, who quietly pointed out her grandfather's (I think ~ I remember father, but she wasn't that old at all) name on the memorials shown. My own grandfather died before I was born, having never fully recovered from his time as a Far-East POW. Mum won't read a certain 2nd WW book she has because it deals with her own father's experiences on the Burma Railway.

Coming more up-to-date, 1 of my 2 very best friends in UK was sent home ignomiously from the Falklands, because his then girlfriend was dying from leukemia & he was picked up 30 miles off-shore swimming back to England! He was in the Vet. Corp & was a specialist bomb person. It was felt that this 1 tiny man was of more danger to the British Army in his emotional state, than the whole of the Argentian Army.

I think my dear, dear friend here was in the military from things he's said, but because he's a Belfast Lad I won't quiz him about his past: who knows what he's seen, lived through, the decisions he's had to face & how would I react if I'd had to live those experiences & face those decisions.

I've watched my 2 eldest in their SJA uniforms in parades commemorating things that meant nothing to them under the watchful eye of their very violent father...

My grandmother lost a brother in 'The Great War' (WW1)

I lived through WW2

Our house was bombed out with us in it.

Houses around us later were flattened and people died in them

My uncle was shot as he parachuted to earth and spent a year in hospital...but he survived.... as did my father and his other brother.

We were lucky...we lived on.

But I do understand what remembrance is all about.

Yes, this is a great post. I think you put into words the feelings many of us have. Thank-you.

Thanks for remembering and hoping for peace. I posted my thoughts http://www.robertsroostecofarm.com/2008/11/remembering.html so I won't leave them here. War is a terrible thing and most who serve hope it will never come. Still, with out them, with out us standing on the wall of freedom, the lives our friends, families, children enjoy now and in the future wouldn't be.

Hope for peace. Work for peace. But, be prepared to defend the right to live peacefully.

Here Here. The UK needs to stop listening to men like Bush. Hopefully Obama will get in and get US out of Iraq soon!

I attended my town's Remembrance service along with only a handful of others. It's easy to forget the sacrifices of those who have gone before and those who are still on the front line.

Although not exactly relating to the thread please allow me, dear friend, to tell you of the newest home of British comedy on the online.

English For Dirty Foreigners is the only show on the internets that will lie to you outrightly about British language, traditions, customs and stuffs.
Oh yes, we have many stuffs.

Come for the comedy.
Stay for the hilarity.

Wow. That has to be the most inappropriate piece of spam I have ever seen.

Melanie, here in Israel, we have a Remembrance Day in May for all those soldiers killed in all the wars. What makes it special is that there is a 2 minute siren at 11 AM where everyone stands in attention wherever they are at the time. At 8 in the evening there are celebrations for Independence Day. That way, we remember how hard a fight it was to gain our independence