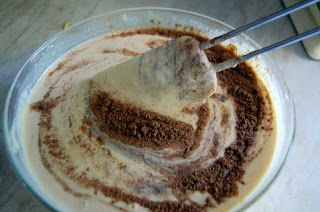 I made pumpkin pie today, as I do every year from the scrapings of our Hallowe'en pumpkins. This year I used ready-made shortcrust pastry for a change. After all, the pastry isn't the best thing about the pie, it's really just a shell to hold the spicy pumpkin-flavoured custard. So why take a lot of effort over it if you don't want to?

Delia Smith got a lot of stick a little while ago for teaching people how to cheat at cooking. I don't understand why though. I'll take Delia over ten of your Gordon Ramsays any day. I understood what Delia meant, and I think it showed a deep understanding of the difference between good food and bad food. Take instant powdered mashed potato for example. It's a travesty. It's not food at all. It's some sort of fake food substitute. Here are the ingredients (I found them on the web):
Potato (82%), Full Cream Milk Powder (15%), Salt, Emulsifier: Mono and Di Glycerides of Fatty Acids, Antioxidant: Ascorbyl Palmitate, Natural Colour: Curcumin

It can't do you any good to eat it and it doesn't even taste nice. But frozen mashed potato is a different kettle of fish. The ingredients are:
Potato, Milk, Butter (2%), Salt, White Pepper.

I don't know how you make mashed potato, but that's exactly how I do it. And that's what Delia was trying to say. Use your brain. Distinguish good food from bad food. You don't have to make everything from scratch. Even top chefs don't do that. I know how to make butter from scratch but I only do it once in a while, for fun (or by accident). Most of the time I buy my butter like everyone else, top chefs included. I know how to make bread from scratch. Is it cheating if I buy a loaf instead? How about if I buy it from a farmer's market instead of from a supermarket? Is that less cheating? Why?

OK, super weird, I baked a pumpkin pie today too! I snuck a piece an hour after it came out of the oven. Hehe. Is there anything better than warm gooey pie? I love this season.

Nothing tastes as good as a home made ANYTHING! Particularly a well spiced pumpkin pie this time of year. Enjoy it!

I'm glad your sticking up for a bit of cheating.

The ready made pastry I buy here in France is better than I can make....it is quite good, but my own pastry is AWFUL!!! so I always use it. I feel less guilty about cheating all of a sudden... Thanks

I'm glad your sticking up for a bit of cheating.Nothing tastes as good as a home.Andy Guo

Very nice commentary. Healthy is the name of the game. And chances are the closer to home (i.e. farmer's market) the better. But let's skip all that chemical crap!!

I used to occasionally buy Barbara's Instant Potatoes. The ingredients? Dehydrated potatoes. I rarely do anymore, but they had their place as an emergency food stock.