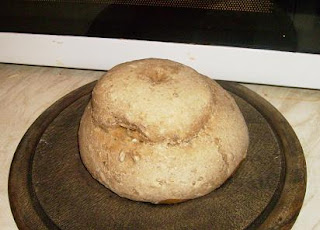 One of the most difficult things about becoming more frugal is breaking out of the mindset that you must have the right product for every need. For example, it is possible to crush garlic without a garlic crusher, by using a knife. It is possible to liquidise soup without a liquidiser, by pushing it through a sieve, although it is laborious. It is possible to mash potatoes without a potato masher, by using the end of a rolling pin (in fact this is a better way of making e.g. swede mash which is tough to do with a potato masher). The kitchen seems to be a particular place where manufacturers like to sell us gadgets we don't really need.

I remember years ago making a measuring jug out of a 1 pint milk bottle. I filled the milk bottle with water, then shared the water between two milk bottles until the levels were the same. Then I marked that as my "half pint" level. Repeat the process to get a "quarter pint" level. Add a quarter pint to a half pint to get the "three quarter pint level" and so on.
I wrote this post because yesterday I tried out a method for making bread in the microwave. Of course I needed a microwavable loaf tin - or did I? I could have bought one from the Lakeland shop a short drive away. Or I could look in the cupboards and find a variety of rectangular plastic containers, including washed margarine and ice-cream tubs, which would do a good job. In the end I opted for yet another solution - I made a cottage loaf instead.
It's rewarding being ingenious, and once you get in the habit it gets easier to think of creative frugal solutions to problems. I thought it would be fun to pick your collective brains and see what lateral solutions you can come up with to the following situations:
Posted by Melanie Rimmer at 7:35 am

Wonderful post - it is difficult to think outside the box. When first married I had neither a pie pan nor rolling pin but I did have a husband who loved pie. Used a shallow Corning casserole for pan and a glass jar for rolling pin. Worked great and cost nothing.

I'd steer away from using things like margarine tubs in the microwave - plastic that hasn't been specifically treated to be used in the microwave can emit chemicals into your food - if you google a bit on this you'll find more reliable sources than me.

However (and regardless of the fact that yesterday I used a voucher I was given as a present to buy a few of just the kind of gadgets you're talking about), here are my solutions for two of your questions:

Grate cheese using a vegetable peeler - you get long thin strips which are perfect for using instead of grated cheese.

And...oh my what a bad memory I have. Need to go back and check what the other question was!

Ah, yes, I remember now. Don't have a specific answer to the baking question but on a related note (and sorry, I don't do imperial, only metric), 40g of sugar is a dessertspoon full.

2 oz of butter (etc.) is very easy. if you unwrap a block of butter, you'll see one of the long sides has markings on it. Those markings equate to 2oz, i think. To be honest, unless its for a really wierd amount in something that needs to have the *exact* amount of butter (e.g. a cake) i don't measure, and even when i do i'm pleased to say that i rarely get it wrong. When i make bread, in which i put 1oz of butter, i just lop off a bit of the pat of butter, nuke it to melt it and use that.

in terms of measuring sugar: you could do a variant on the american cups (as you used the milk bottle). you would still have to have the scales initially though to measure out 2oz of sugar as your base unit, and since volume is different to weight (i.e. 1 cup of sugar is going to weigh differently to 1 cup of flour or 1 cup of dried apricots) you'd have to repeat the whole process for everything. I guess the other way forward would be to do what you did with the milk bottle on a home made set of scales, till your two balances equal out evenly.

interesting post, though - i've had to think outside the box when it comes to kitchen gadgets (and i adore cooking). I don't own a garlic press - i use the knife option with a big bang (its rather therapeutic!), and i've used a wine bottle for a rolling pin before now!!

using a washing line without clothes pegs: loop the washing line around one end of the tree or support or whatever you're using to hold it up. then twist it, a lot, before you wrap it around the other tree. What you then do is to poke the edge/corner of the clothes up through each twist, and if you've twisted it tightly enough, it should hold.

you can also make clothes pegs from wood.. take a piece of wood about a finger thick, maybe a bit thicker, and a finger length, split it down the middle from halfway down to the end. you can then jam it onto the clothes as a makeshift peg.

can you tell i was a girl guide? I used to have camping books telling you how to make temporary stuff like this - everything from clothes pegs to washing up bowl stands from wood and twine!!!

Of course, you'd have to first find a container that holds the right volume (if you didn't already have measuring cups - these can be bought from asda for a pound or two), but once you have it's a far easier method of measuring.

Never used a microwave oven to make a loaf of bread - was it good and light and crusty?

more importantly, exactly how do you make bread in a microwave?

Bread in the microwave? Really?

I'm not a total gadget junkie and have lightened the load over the years, but I do still have a few. :)

Great answers everyone. Keep them coming.

The bread was a normal bread recipe, split into smallish batches (1.5lb of flour = 1 batch) and nuked for 4 minutes, then turn it out of the tin and flip it on its back to nuke for a further minute. It was light (as light as home-made wholemeal bread ever is, not as light as polystyrene shop-bought bread with "flour improvers" etc.) and tasty with a soft crust. It didn't brown so it looked a bit odd - you can see in the photo. I liked it, I'll probably do it again. I came across it in Pete Griffin's "More Scenes From A Smallholding" - excellent book, review to come.

Re clothes on the line without pegs....
When we lived for six years afloat in the Med, we needed a foolproof way of hanging the washing in the rigging as clothes lost from the line were lost forever in the wet stuff!
I found the best way was to tie one end of ther line to the mast, then thread the line through the sleeves of tops, right across from one side to the other, or from the bottom to the waist of one leg of trousers, tie the other end of the line to a secure solid place and spread the washing along the line. We never lost an item of clothing. Towels and flat items were placed flat on deck with solid things on top to hold them down
However, it was always sunny (Or I didn't do the washing!) and often very windy!

Correction - "More Scenes From A Smallholding" is by CHAS Griffin, not "Pete" as I mistakenly said.

have done microwave bread before but it didn't come out too well, might have to experiment as I'm useless at remembering to stick the breadmaker on in time.

Soda bread is good if you need bread fairly quickly.

I live in the US and found your blog through the carnival of the green. Now I read it everyday. I love your blog. There are arent too many people around me in Texas that are trying to live with a smaller footprint.
My idea yesterday was to use tennis balls in the dryer instead of using dryer balls. I tried it out yesterday and I the load dries 10 min faster. It is a little noisy though.

Hi Anonymous, thanks for your kind comments. I can stand to hear people saying nice things about my blog all day long!

Putting tennis balls in the dryer does seem to speed up drying times. Try leaving out the fabric softener as well - you may find the action of the balls softens you clothes without adding extra products. But isn't Texas very hot and dry? Should be ideal for drying clothes on a line which would cut your carbon footprint even more.

Another hint an egg in its shell should weigh approximately 2 ounces. So if you have a balance scale you can make sponge cake using the eggs to balance to weigh your fat flour and sugar which should weight the same as your eggs..

yep I agree with karen lizzie. Always use a heaped tablespoon of flour as 1 oz (about 30 g) and a small tablespoon for sugar, which is heavier. I am too lazy to get out the scales all the time. What about one of those glass beakers that has the volumes along the side? I have one of those which is good for flour, sugar, rice etc.
I have a bread machine but it is playing up snif snif so I am most upset as I feel it is a gadget worth its weight in gold. Fresh organic bread, brioche, home made pizza, it saves me time and a fortune (and it's surely better to bake there than turn on the big oven??). I'll have to get it fixed I guess.
Never thought too much about kitchen gadgets, I only use ones I really need but I have a couple - mixer, steamer, er ok I DO have a sandwich toaster too. In general they last a long time so doesn't seem that wasteful. (Why don't you use a potato masher? They last a lifetime...)

if you put your cheese in the freezer you can crumble it up with your hands once you take it out.

same with many nuts. i take them out of the freezer and crumble those with my hands instead of chopping them. i always give the nuts a light toasting tho after they have been in the freezer.

I work the other way - sit my mixing bowl on the spring scales, and never bother with measuring jugs, scale pans, etc. I use oil, not marge or butter - no melting; use a bit less as it's got no water in. I've heard microwaves can knock optically active molecules (the sort that can rotate polarised light) out of shape - making them useless if not toxic - but I've to get to the bottom of that.
Lesley, threading clothes on the rigging, does that explain holes in the toes of your socks?!
Lesley