Review: How To Grow More Vegetables 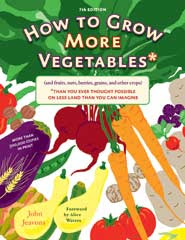 I bought John Jeavons' How to Grow More Vegetables recently, hoping it would live up to its promise of showing me:

"How to grow more vegetables (and fruits, nuts, berries, grains, and other crops) than you ever thought possible on less land than you can imagine"

I got pretty irritated wading through several chapters of irrelevant waffle that kept promising this amazing new technique would allow me to grow between twice as much and thirty-one times as much per unit area as "conventional" methods (which I assumed meant whatever method I am using now), but which never spelled out what this method was. When I finished chewing my way through the book I was disappointed. All this "new method" is, is just:

Just about every gardening book I've got advises those exact same things.

It also contains some advice I consider dubious:

In retrospect I'm glad I read it, but I wish I'd got it out of the library instead of spending money on it. For one thing, it does contain some helpful information, but buried under a lot of crud. For example, information about the depth of the root systems of various crops.

It also makes very clear what a "raised bed" is. For a long time I thought it meant building retaining walls full of earth and planting stuff 2' in the air surrounded by brick walls. It doesn't mean that at all - it means having areas where you plant, with paths in between. You don't walk on your beds (you have to make them about 5' wide or less, so you can reach the middle for weeding and harvesting) so they don't get compacted and don't need digging every year. Within those beds you plant intensively, so leaf growth covers all the soil, stopping weeds growing and water evaporating. The book makes that much clearer and if I had read it sooner I could have saved a lot of confusion about raised beds.

I also like its emphasis on the soil. It talks a lot more about soil than plants. For example the fact we are destroying soil far faster than soil is being replaced. This is going to be a very hot topic in the near future, although the public have heard very little about it so far. I'll write more in a future post but remember you heard it here first. The book describes all the different components of soil - organic and inorganic, living and dead. It talks about the ideal structure of soil as a "living sponge cake". In the section about watering it emphasises that you are watering the soil, not the plants because plants don't take in water through their leaves, only their roots. All these are things I have felt for a long time and it is nice to see them expressed so clearly.

The thick cheap paper and goofy line drawings may put some people off but I love that sort of thing. My favourite illustration from the book is of a bearded hippy sitting cross-legged on the ground sowing seeds in a bed. I find that sort of thing charming, and it captures my imagination much better than the modern style of glossy photographs which manage to look less "real" than drawings do. In fact, I wish I had the 6th edition instead of the 7th, because it had a picture of a quilt on the front with appliqued fruits and vegetables.

But it's not going to help me grow loads more crops than I have in the past with some radical new approach, because I was doing all those things anyway.

If you want my advice, buy this book if you see it cheap in a charity shop, or ask your library to order it for you. It is interesting, and a useful part of building up your understanding of vegetable growing. But don't believe the hype - you're probably already using most of the methods it advocates so it won't tell you how to have vastly bigger yields.

Posted by Melanie Rimmer at 8:29 am

So That's what they mean by 'raised beds' ! I too thought they were for people who like myself, have difficulty with bending and involved retaining walls... I've had visions of geriatric arthritics like me wizzing around harvesting their crops with ease! In fact I thought my big pots could be considered to be raised beds... but now I know, thanks to you, without even having to buy the book.

By the way, my seeds are germinating and the first rhubarb was lovely... see http://gowen.org

I have a friend who is very keen on quilting... I'll send her to look at your site.

Hmm best I do not comment on that book - there are so many authors and magazines jumping on this very protitable bandwagon now there is a upsurge of growing vegetables.

I guess it will be a bit like cookery books - people have rows of them, but carry on doing what they always have which works well for them - or choose the bits they like best and follow those.

I have a mixture of raised beds - and a raised bed can just be a bed with any sort of pathway around it - and the earth just liked higher than the path.

Have a happy gardening year

I don't think this book is a case of bandwagon-jumping, Allotment Lady. it's the 7th Edition so it's been around a long time. And the methods it advocates are basically biodynamic gardening, which has also been around for about a hundred years.

I think I might have enjoyed it a lot better with a) less irrelevant waffle, and b) without the wildly exaggerated claims of the title. Basically my hype-detectors went off the scale and that ruined what was otherwise a perfectly good book.

I've got the %th edition with the quilt pic! And I was drawn by the strap line - how to grow more veg 'than you ever thought possible on less land than you can imagine'. A sort of mission statement for the gardener!

You should check out the Garden Bloggers Book Club! They read Teaming With Microbes in January, and there was quite a buzz generated by it. I think you'd fit right in with your informative reviews, and everyone would enjoy your thoughts! :)
http://maydreamsgardens.blogspot.com/2007_01_01_archive.html

The March selection is: The Gardener's Year by Karel Capek, and April's is: Passalong Plants by Steve Bender and Felder Rushing. Just write a review of what you thought of the book and let Carol know you've posted. I really hope you decide to participate as I like your thoughts on books you've read!

Question for you Mel; do you think you'd have found the book helpful if it'd been one of the first you'd ever read? Is it just that you already knew about companion planting etc. Would you recommend it for a new-starter for example?

No Steph, I think it wouldn't be a good book for a beginner as the useful information it contains is hard to find amongst all the hype and waffle.

Come to think of it, I have yet to come across the perfect book for a beginner vegetable gardener. Maybe I should write it. Until I get around to it, I would recommend Food From Your Garden (even though it's rather out of date so doesn't mention things like organic approaches, permaculture or intensive spacing), and/or Complete Book of Self Sufficiency (even though it also contains loads of stuff that is probably irrelevant to the allotment holder, such as detailed information about livestock, coppicing and all the rest - but the section on getting a new veg patch started is super and just what beginners need to know).