The Law of Return 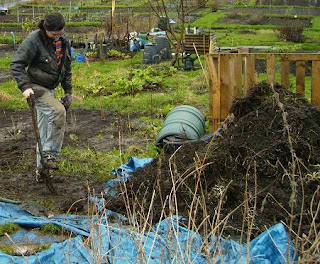 There's an important principle of organic gardening called the law of return. The idea is that you shouldn't take anything away from the land without putting something of equal value back. It sounds suspiciously like airy-fairy nonsense but it is actually quite sensible. If you keep growing crops on a patch of land and then taking them away, to sell them for example, eventually the land will become depleted of certain nutrients and will produce smaller and smaller harvests and ultimately be unable to grow that crop (or perhaps any other) at all.

So-called "conventional" growing (in reality the system is less than 100 years old) solves this problem by adding fertilisers - doses of single nutrients such as phosphorous or nitrogen. This is rather like taking vitamin pills. You might see an improvement in the patient's condition but it's no substitute for having a healthy varied diet in the first place.

With organic gardening you avoid the problem of depletion by the "law of return". So you compost the parts of garden plants you don't need, and the weeds. And the things you take away, the fruit and vegetables, are replaced by compost brought in from elsewhere, or well-rotted manure, or something else of equal value. If you can manage a closed system in which nothing leaves the site (which in practice means composting human and animal dung and burying animal carcasses on site etc.) then that is the ideal situation.

Ed and I have been digging up couch grass roots from the allotment for, oh, feels like forever but in fact it's a few weeks. All the couch grass roots are now piled up on top of a sheet of horticultural plastic, with more plastic wrapped around it and over the top. It will take take at least a year, perhaps more, before they all rot down but when they do they will turn into beautiful compost, full of nutrients which we will return to the soil. The alternative was to take them to the landfill site, and lose all those nutrients forever.

When you see the huge pile of roots, already starting to try to sprout up again for another year, you can really see the sense in the law of return. You can see the roots in the right of the picture, the heap is about 4 feet high. They are full of nutrients for the soil, trace minerals as well as carbon, nitrogen and all that good stuff. It would be a serious loss to dump them all off-site, but this way even weeds can be put to good use.

Posted by Melanie Rimmer at 8:03 am

Nerd in the Country said...

There are a number of trace minerals that are not necessarily all that useful to the plants, but which are useful to us when we eat the plants. Those are generally depleted in conventional fields.

Commercial organic farmers use various commercial preparations that consist of things like ground up rock. It takes longer for those preparations to become useful, but that's how it has always been done in nature.

Of course, if you want to keep the nitrogen content of your soil high, rotate some kind of legume in. Beans and peas are great for human crops, and clover and alfalfa are good for fodder crops. (Of course, you can eat alfalfa if you want.)

No matter what you do, you need some kind of bulk organic material to retain water, support the microbiota, and generally condition the soil. This has to be continually added, as it breaks down naturally.

You seem to know that you're doing! Good luck!

Don't bury animal carcases if you have a registered holding or have registered your poultry flock. If you do bury dead animals in those cases, it's a criminal offence.

Dead chickens are now supposed to be disposed of in an approved incineration facility. But just try finding one!

All other fallen livestock is supposed to be collected by the National Fallen Stock Company.

Thanks, Stonehead. Does that include stillborn lambs etc?