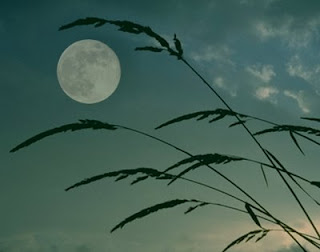 May's full moon is on May 20th at 2:11 GMT. Remember that full moon is an instant - the moment when the moon stops waxing and starts waning. It's not a date. The instant of full moon this month occurs on May 20th in some time zones and on May 19th in others. Thinking about celestial mechanics is enough to make your brain dribble out of your ears, but I think I'm right in saying that wherever you live, the moon you see after nightfall on 19th May will be fuller than the moon you see after nightfall on the 20th. That's why I'm publishing this post today and not tomorrow.

In India and other places close by, the full moon moment occurs on May 19th, so that is the date Buddhists celebrate Vesak - Buddha's birthday. Buddhists make a special effort to avoid harming anything for the day, they eat vegetarian food even if that isn't their usual practice, and they release birds, insects and animals as a symbol of liberation.

We've had beautiful weather so far in May and I'm looking forward to getting a good view of tonight's full moon, and perhaps taking some photographs. But the beautiful photograph accompanying this article isn't mine, it's by kind permission of Kerrdelune who writes Beyond the Fields We Know.
Posted by Melanie Rimmer at 10:00 am

I am enjoy reading your blog. Our place here celebrate Wesak Day as public holiday. Even though I am not Buddhist, but I find that it's such a
meaningful day like what you stated in this blog.

Thank you for the phrase about your brain dribbling out of your ears. I often feel like that!