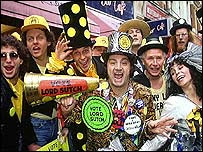 16. Make Weeding an olympic sport in order to save the 100 year old Manor Garden Allotments from being demolished for the 2012 games.

136. People who drink gin and tonics will not be allowed ice. This will help to preserve the polar ice cap.

137. To make electric cheaper to produce all joggers will be placed in a huge revolving drum linked by a dynamo to the national grid.

139. We will channel all the hot air coming from Parliament into a purpose built Wind farm just off the Coast, so that everyone will have free heating in the winter, and electric fans in the summer.

And here are some from an old manifesto that seem to have been dropped:

All foxes will be issued with sheep’s clothing.

All houses built on flood plains will have foundations made of sponge, in order to soak up surplus water.

Fox hunting will be re introduced under the “one hound – one dog” policy to make it a bit fairer.

To solve the increasing obesity problem and global warming, all TVs and home computers must be run only by exercycle generators. A phase-in period of this major remedy will be allowed - maybe 5 to 5m minutes.

Cartoon from Throbgoblins. Click on the panel to read the whole strip. 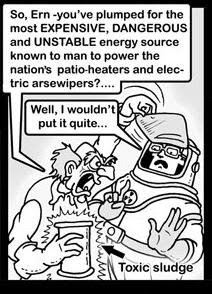 Email ThisBlogThis!Share to TwitterShare to FacebookShare to Pinterest
Labels: funny

Barmy they may be but perhaps ultimately more effective than the inevitable backtracking that follows any green policies put forward by any of the major parties.

Barmy ? How does Gareth Rae come to that conclusion? As I've got older and watched the mistakes the so called experts make, I've wondered if the 'sensible' approach is so sensible after all. Maybe the so call whackos have got the right answers. Could the world be so much worse if we try their solutions? At least we'll have fun trying. More than can be said about 'the real world' to date.

Definitely agree with the jogging. Why anyone would want to get exercise tramping along roads when they could be digging a vegetable patch has always confused me!