A Spring Clean for the May Queen 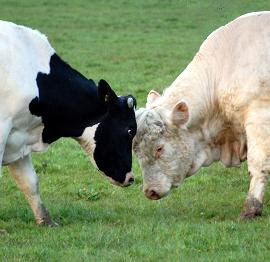 It's May 1st - May Day, Beltane, Walpurgis Night, whatever turns you on. Like a clock that chimes the hours to remind us of the turning day, these festivals remind us of the turning year. In the case of May Day, spring is passing into summer and the festivals at this time of year emphasise flowers, dancing and fertility in its earthiest sense. The Maypole, the May queen, 'Obby 'Oss, the Furry Dance and the other components of May Day celebrations all tend to be about fertility.

It's hardly surprising. Everywhere I look I can see animals trying to attract mates. The blue tit who is working his little rocks off furnishing the bird box in my back yard is doing that because he hopes to attract a mate. Dad reports the swallows are flying acrobatically in a very different way than when they are hoovering up as many insects as possible - they are showing off their flying prowess in fierce competition for mates. And in the field behind my house, the cows have been joined by the bull. Poor bull spends most of his year all by himself, but this is the season when he gets to hang with the ladies and do what bulls like to do. The sap is rising and all creatures are trying to make babies, so they can feed the babies whilst food is plentiful through the summer, so that by the winter time the young ones are strong enough to survive the cold hungry time until next spring, when it all starts all over again.

Some people think that there's too much sex on TV, movies, magazines and so on nowadays. I disagree. I think the problem is that the media show a weird, distorted view of sex - it's all about impossibly perfect photoshopped young women's bodies being ogled by men. There is no recognition at all in the media of sex for old people, sex for fat people, sex for just ordinary normal people. You don't see women enjoying sex, you don't see sex in the context of a relationship (it's well known that married people don't have sex), and nothing about fertility or making babies. In fact we all seem to become terribly prudish whenever anyone refers to sex in those contexts. I'd like to see a return of a natural, lusty, earthy approach to sex, with an absence of embarrassment and hang-ups. Maybe I should erect an enormous Maypole in the middle of Poynton park. Would you join me?
Posted by Melanie Rimmer at 2:01 pm

Once again your comments resonate with me. That's why I'll be running through a Gloucestshire village naked bar a green cycling cape on Sunday night. I'm hoping it will become an annual tradition. I've written a post about it.

Very truthful, and food for thought. The PS'd model was amazing.

I'd be with you dancing round the Maypole. I was amazed as a teenager when I saw a programme explainig about why women wear the make-up they do. It's all to make them look like they're sexually aroused - engorged red lips and rosey cheeks, and wide eyes with dilated pupils. It all made sense once I understood.

I'm not _entirely_ sure, but I was fairly certain that male birds didn't have little rocks *g*

THEY wouldn't allow it, Mel. Our betters stopped all that centuries ago. You can't allow the hoi polloi to enjoy anything like that; not until they can find a way to tax it or charge for it. It's far too good for the likes of them.

Three cheers for the maypole, and long may the tradition continue. Oh yes, and Happy Beltane!

That's why I thought the recent British Heart Foundation ads were so brilliant - the 'sex and swimming' poster showed normal, older people. It was a joy.
http://britishheartfoundation.blogspot.com/2008/05/bloggers-bare-all-on-our-sex-and.html

I agree and would love to join you round the May pole, albeit an ageing hippy with all my wobbly bits and my inhaler but at least I'd enjoy myself.These days I'd probably be told I'm Health and Safety risk and that's another rant for another day!
Love from Kathyann and the girls