A Day at the Apiary 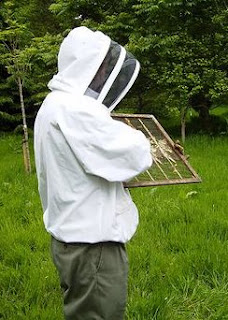 The weather brightened up so I did go to the apiary yesterday afternoon with my bee guru, Arnie. We had a few tasks to do and they were all fun.

First we transferred a swarm Arnie had collected from a nucleus box into a proper hive and fed them. A nucleus box is a small temporary beehive. Arnie collected the swarm in Bollington, but we don't know whose bees they were. The queen was marked with a blue spot which means she is four years old. That's pretty old for a queen. Beekeepers paint coloured dots on queens' backs to make them easier to find in the hive and also show how old they are by the colour.

Next we transferred my bees into a WBC hive. Finally! I've had them for more than a year and they were always supposed to be in my own WBC hive but they have remained in a borrowed National hive instead. Now I can clean up the National hives and return them to the person I borrowed them from. The colony is doing really well. The bees are strong in numbers and they have loads of honey stores, despite it being another poor season. Arnie says he has been feeding his bees because their stores are so low.

I saw my queen! I have never seen her in the year I've had her. I've just had to rely on the presence of eggs to reassure me she was still there. But I spotted her before Arnie did. She's huge! I don't know how I missed her before. She's unmarked, so I want to get in touch with Ally from Ducking for Apples and ask her if she knows when the queen was hatched. The we can mark her with the prope colour, and also have some idea how much longer she's got in her. Arnie wants me to ask Ally about the breed of the bees. He thinks they might be Welsh blacks. Ally sold me the bees in the first place, but she has just had a family bereavement and I don't want to intrude.

Even more exciting than seeing the queen is taking some honey. A WBC hive is slightly smaller than a National hive, so I took home two frames of capped honey and we all had honey on toast as an after-school snack. It was delicious. No trace of mouse pee this time.

The final exciting thing came as a big surprise. The landowner had told me there were three beehives somewhere else on his land, left behind by the chap who had this apiary before me. Arnie and I went to investigate, thinking we'd just be taking away some empty equipment to clean up and reuse. But when we got there we saw bees flying around. Two of the hives were empty (though infested with wax moths, and one of them housed a wasps' nest, now vacant), but the third clearly housed a colony. I hastily replaced my veil and gloves, but Arnie had left his gloves behind thinking we wouldn't need them. We began to disassemble the hive to inspect the colony anyway - some beekeepers work bare-handed as a matter of course. But these bees were unused to being handled and were quick to use their stings, so we left them for another day.

We're going back in a week and we'll check the swarm colony, check my bees and take more honey, and inspect the surprise colony. I want to divide my bees some time this season so I end the season with two strong colonies going into the winter.

I understand something now I didn't fully understand before. It's not about honey. Frankly, beekeeping is a complicated, labour intensive and expensive way to get honey. If you're just after honey, you're far better off buying it in the shops. The real reason to be a beekeeper is simply because it's a heck of a lot of fun.
Posted by Melanie Rimmer at 9:59 am

Well done from me too. Have you any of that homey left? About how much did you get out of the two frames?

Doesn't nurturing a hive makes a contribution to the earth too because of colony collapse disorder? I've been scared to even attempt it because I've talked to so many people who have lost entire swarms and I have no clue what I'm doing. :)

We don't have CCD in the UK yet, Blicky. But even in countries where they do have it, there's a lot of misconceptions about CCD put about by badly informed reporting. I wouldn't let it put you off altogether. Your other reason - "I have no clue what I'm doing" - is easily remedied by signing up for a course. If you're interested you should join your local beekeeping group and find out if they run any courses. I can strongly recommend it.

OK maybe I'll get the cat to do the hard bits. :) Have you read The Secret Life of Bees? It's fiction but makes bee colonies seem so lovely and poetic. You might really like it since you bring an added understanding.

I'm glad the bees are still buzzing and happy and healthy in the UK!