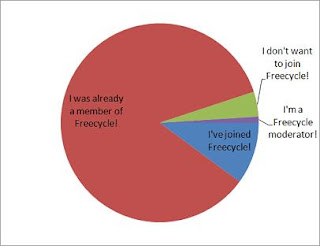 98 people voted in the Bean Sprouts Freecycle challenge. The voting was as follows:

Wow! Voters were overwhelmingly already members of Freecycle, and a number of people commented to say they were instrumental in setting up their local groups. Ten people voted to say they had joined Freecycle in response to the challenge. And we'll never whether any others joined because of the challenge, but chose not to vote. As ever I'm amazed by your response to these polls. A new challenge for July will be appearing shortly.
Posted by Melanie Rimmer at 9:54 am

Thanks for this, Melanie. I had never heard of Freecycle before and just joined the New York City chapter. I have loads of stuff to give away. What a fantastic idea!

I LOVE freecycle... when it came to our area... I was thrilled... It is such a wonderful way to share used items:)
shellys.hut@gmail.com

Freecycle is da bomb! I have been a member for a couple of years. Membership is not required though- I have also put items on the side of the road in front of my house witha carboard (peice of pizza box) sign saying "FREE- TAKE ME!" and Voila- the items go away- him... maybe I should try that with roommate....

Hi Melanie. I'm back from my internet free trip to the family home in KS. Rob as beat me to it, but I have to say how much I enjoyed sitting items out by the road with a free sign, as I cleared out treasures from the garage, shed, yard, etc. Ok, one item actually sold for $100, but he rest was free. Fun to look out the window and see it had found a new home!

KS = Kansas... many, many miles from my now Washington home.