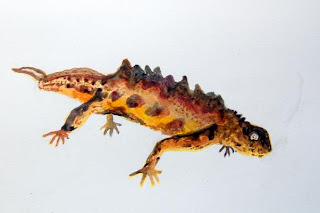 I had a lovely picnic yesterday with my kids, my sister Stephanie and her kids, and our sister Lindsey. We all met up in Calderstones Park, Liverpool.

We had our picnic close to a small pool. My 6-year-old son, Sam, pointed out a plaque which said there were great crested newts in the pond. Great crested newts are a protected species in the UK and it's great to know that they are thriving there in the middle of Liverpool, although we didn't see any newts ourselves.

I got chatting to a woman who was tending a small memorial to her daughter who had died of cancer six years ago. There were some flowers planted around the base of a tree near the newt pond with a discreet plaque identifying the place where the young woman's ashes were scattered. The woman told me that sometimes she and her surviving daughters came and had a picnic together in this place so they could all be together again. I thought that sounded really nice.

But the woman expressed regret that the pond was in such such a bad state.
"They've let it go all stagnant," she said "It used to be clean and there were ducks here"
I got the feeling it spoiled their family get-togethers, this idea that the pond was neglected. So I pointed out the plaque and explained about the newts. I said that the pond wasn't stagnant - it wasn't covered in weed or algae and it didn't smell. It seemed to be well-tended because it didn't have any litter in it or around it. The water looked a little muddy, but presumably the newts liked it that way since they were reproducing here. There was another, larger lake in the park where the ducks lived, and it's a good thing there were no ducks in the newt pond because I guess the ducks might eat the newts and their larvae. I also pointed out a five-foot wooden sculpture of a newt amongst the trees by the pond.

By the end of our conversation the woman seemed much happier about the pond. It's a shame to think that there had been the least shadow over her daughter's memorial because she believed the pond was dirty and neglected. I'm glad I could help to lift that shadow, and I hope that the next time she and her other daughters get together there, they will discuss the rare newts in the pond. It's a beautiful little spot to spend eternity. I wouldn't mind being scattered somewhere like that myself when the time comes.

Great crested newt painting by Stephanie Smith
Posted by Melanie Rimmer at 10:02 am

Ishh. I used to be deathly afraid of salamanders when I was a little kid. When fishing I was lawyas afraid one would swallow my hook and I would have to find a way to dislodge it. Never happened though. But that picture send shivers up and down my spine!