Weed of the Week - Rosebay Willowherb 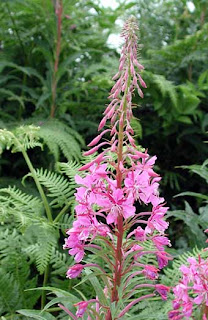 Rosebay willowherb is also known as fireweed due to its habit of colonising areas devastated by fire. It also flourished on bombsites during the Blitz. It's not usually a problematic weed. You can easily pull it out when it pops up. If you take over a neglected patch of land there might be plenty of willowherb growing on it, but it's nothing like as troublesome as bindweed or couch grass or any of those difficult weeds. Do pull it up before it sets seed though, as it makes downy seeds which float up and spread everywhere.

I think it's a very handsome plant, and apparently it was introduced as an ornamental. I'm not at all surprised, and I don't know why we don't still grow it as a flowering garden plant. I think it looks a lot better than some of the things you can buy in the garden centre. I've seen some references that say you can eat it, but it doesn't seem to be a great delicacy. You can eat anything that isn't actually poisonous, but whether it's worth the effort is a different question.
Posted by Melanie Rimmer at 10:00 am

Email ThisBlogThis!Share to TwitterShare to FacebookShare to Pinterest
Labels: weeds

Interesting we just posted a homemade vid about the utility of the humble dandelion in our blog. Some "weeds" are extraordinarily nutricious.

I remember telling my mum and dad about this plant - mum was a keen gardener but had somehow never come across this before, and it featured in a junior school broadcast called "A Place To Live". We then had a school trip to Formby Point and sketched it in the field. You're right, it's really pretty - the gossamer seeds are pretty too, but rather too well designed - like you say, they spread VERY well.

It's a shame, because it is very pretty - but at the same time it's a darned nuisance. I'm getting very good at cutting it off in its prime immediately after it flowers.

Wow, I wish my weeds looked like that. The picture you posted looks so beautiful with the fern too. Send me a cutting ( c/o blitty kitty, usa, should get there). I've never seen it here. I leave a lot of my weeds though --milkweed in with the veggies because the monarch butterflys eat them.

It is a common wild flower over here in Canada. Bees love it and the part you eat is the shoots that come up first thing in spring. Tasty. A bit like asparagus but different!

there's a really nice white form that i've definitely bought from nurseries before!

I think its a beautiful plant, not quite as handsome as its near relative the hairy willowherb, but stunning en-masse on a late summer hillside. Never tried eating it though....

I like this plant looks great too, the flowers smell lovely as well and it can be used medicinally.

As a child growing up on Merseyside, Rosebay Willowherb was about the only flower that I remember, apart from dandelions whose leaves we gathered to feed my grandfather's canary.

As you said, it proliferated on bomb sites and was really amazing the way it transformed devastation into beautiful gardens, seemingly overnight. Funny name, isn't it?