If We Build It, They Will Come 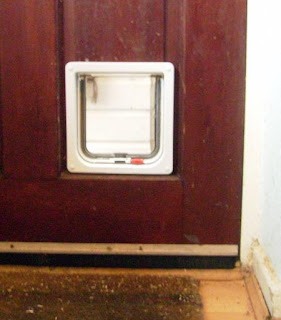 I want a cat, but Ed isn't so sure. Then my friend Guy pointed out that I don't need to get a cat, I just need to get a cat flap. Someone I used to work for believed that there was a cat god who sends cats to people who really need them. So now we have a cat flap. If we build it, they will come.
Posted by Melanie Rimmer at 10:07 am

do you know if any cats live in/visit your street? I've seen a squirrel or two, but no cats.

You can have ours if you like! Abelard slept inbetween our pillows the other night. Andrew rolled over and Abs just glared at him, before Andrew physically shoved him, at which point the cat just stretched, then climbed over my head!

I need a good night's sleep: maybe you can cat sit?

Your colleague is so right - cats do find the people they want to live with ... sounds as if Abelard might move in once you've got your flap installed ;)

I'm pretty sure it's true! We've lived in two houses with flaps now and are constantly finding kitties at the door.. but hubby is massively allergic and won't let them in :(

While I would agree with the comment that cats find people they want to live with, I am not so sure a cat flap will help. I think the cat will need to choose you and check out the house before starting to use a cat flap.

You may regret it.

On the one hand getting a cat is probably the best way of stopping other cats sh!tting in your garden, but you will lose a fair few of your wild birds who will now keep away, or die a horrible death (possibly even within a few short hours of hatching).

Plus, getting a cat is the absolute best way of also getting mice in your house. The cat catches them outside, brings them in (injured and bleeding), deposits them at your feet so you can see how clever he is. The injured mouse then legs it and starts tear-arsing around your house and crapping in your cupboards and scratching in the walls at night.

Brick up that cat flap as soon as possible!

All our cats have arrived by osmosis. We've only one at the moment and she'll be twenty this year - so the birds are safe unless they paint themselves fluorescent yellow and sit in the middle of the path and kick her as she goes by. She only goes out under hydraulic pressure these days.

Oddly, none of the cats we've had ever brought birds back. One brought rats and when he was a kitten, slugs, but never birds.
Oh, and fleas of course.

This made me chuckle!

Mind you, then I remembered how indignant I was when I bumped into a neighbour who told me about a cat she had "kind of adopted", a cat which turned out to be one of ours. Cats are devious - he spends most of the day and night at our house but has conned a nice little old lady into giving him chicken every afternoon.

Our latest cat came through the cat flap ... although I think that it was only because he was a starving stray who could smell cat food on the other side of the cat flap! We hadn't been planning on getting another cat but as he was cute, lost and unclaimed we kept him.

Ps If you want a cat try the charities ... there are lots of unwanted cats. Wendy in our next road is over run with cats being fostered. She's desperate for homes for them and Bolton isn't too far away from you.

Why am I now getting sound effects from your blog?

I kid you not; I'm getting bells ringing and toilets flushing (the sound of; it isn't that alarming) when I hover the cursor over your blog. Is this deliberate? If so, it loses its charm quite quickly!

The sound affects only happen if you use Internet Explorer, they are absent in the decent browsers (I've tested on Firefox, Opera and Safari).

Cats use our cat flap to come in and wee in the hall :-(

The sound effects come from the Hugh F-W chicken campaign graphic. If you hate it I'll delete the image, but it'll vanish in a day or two anyway when it gets pushed off the front page.

I keep thinking we should acquire a cat, because we have unwanted mice. Unfortunately, if we home a cat, we also have to get a regular supply of antihistamines for various members of the family. I wonder if the smell of a cat will deter the mice?

My in-laws have a cat that turned up on their window sill, in the middle of a storm. He was a poorly little thing and needed a lot of looking after (and trips to the vet) in those first few weeks, but he pulled through.

I don't think the cat has ever forgotten the care he received then, because I've never met a nicer, more friendly cat (and my family has always had cats).

We once had a catflap in a rented house. We discovered a stray was coming in when we were out and spraying the sofa!

Now we have 4 lovely cats of our own, two of them are brilliant mousers, very handy on a smallholding.

My husband and I just adopted a brother/sister set of kittens, whom we both adore. Mostly. But we still have photos of the cat we called Mr. Taft from our old place who marched into our flat one day through the open front door, headed straight back to the kitchen, and sat there waiting for us to feed him. All we had was a can of tuna, which we readily parted with. After that, he was a regular fixture in our lives, scratching at the window each morning to be let in for breakfast and then meeting us each evening on our way home. His owners actually lived down the street, but he spent more time sleeping at our house than at theirs.

When we moved to a new home 1/2 a mile away, we'd return to Taft Avenue to try and visit him, but he'd act like he'd never known us. Cats are funny that way. So I guess my advice is that maybe all it takes is leaving your door open occasionally. Cats are awesome. But they are not for everyone.

Our first cat arrived by taxi.

We were sharing a house in Rayners Lane at the time and wanted a cat. One of our housemates, Larry, was strongly against it. He was the doorman at the Lancaster Hotel in Leiceseter Square (the old eye hospital). One night he came back from work by taxi, which wasn't like him at all. He had a tiny kitten with him. It'd been feeding from the bins behind the hotel for three days and sleeping rough. So he brought him home. He (the cat) never lost his taste for melon skin which had been his main source of fluid for several days.

Hi Mel
I couldn't live without a cat, I always think a house is more of a home with a cat dossing around somewhere.
The way we stop other cats from using our cats's cat flap is to bang a two inch nail in to the base of the catflap, on the inside. Our cat can push his way out very easily but when he wants to come in he has to use his paw to to flap the catflap upwards. Sounds complicated but all our cats have learned it very quickly because they're motivated by the food inside the house. It stops unmotivated (unfed) mogs from coming in to wee.
It also means we don't get horrid presents from our cat because he leaves them outside.
I do hope you manage to get your dream cat
best wishes
Nicky

Woody, it's nothing to do with browsers. You're getting the clangs and bongs because of the link to the chicken website. It is driving me crackers, too. I was just winding down with a quiet melodic CD, a glass of wine, and checking what people were up to, and came here, and...

Hi Mel, It will be interesting to see if any cats turn up on your doorstep. Sara from farmingfriends

We have a 15 year old Siamese. When he was about 5-6, we had a garage sale, and he was hanging out in the garage with our Newfoundland and I. A woman came in to look around, saw Poe and asked if I knew whose cat that was. I told her he was ours, and she started telling him he was a stinker. Turns out he would go down to her house, let himself in the basement window, and hang out with her all morning, then come home and stay with us afternoons and overnight. She really enjoyed his company and had no cats of her own, so she said it was fine if he kept doing so. He continued for years.

He has been an indoor cat for the last 5 years since we moved, and seems just fine with it. Cats are funny that way.

Don't you have humane societies in the UK? We have so many cats in shelters in the US you can always find them. We just rescued a 10 year old Siamese last month.