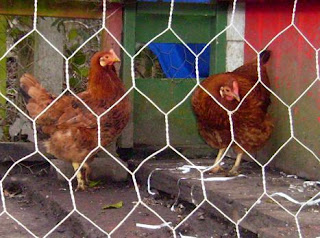 My neighbour, Maria, came around yesterday to offer us two chickens. She has seven, and two of them don't get on with the other five, who bully them. She thought they might get on better with my two, since the numbers are equal. It's worth a shot.

She brought them round at dusk and we shoved them in the coop. The four sleepy chickens clucked softly at each other a bit, but soon settled down. By the time they were fully alert (well, as alert as chickens get) they had already been together 12 hours and so were somewhat familiar and less inclined to fight. They're a bit "This is our corner of the run and that can be your corner" but they're not actually battling each other. I think they'll be fine.

Maria says the new chickens are Rhode Island Reds. I'm no breed expert, but that looks about right to me. They hatched last April and so haven't been laying very long. A hen only has so many eggs in her before she stops laying, so it's good to get them young. Ours are a couple of years old now, and sooner or later they'll stop laying, although they're still very good layers and have laid all through this winter which is great.

I'm not expecting any eggs at all for a few days until the four of them settle in together, but then we should have 4 eggs a day, which is more than we eat. I plan to sell the surplus, to pay for the chicken feed. Then the eggs we eat will be free, in effect. Free eggs, free-range organic eggs as well. You can't complain about that.
Posted by Melanie Rimmer at 9:58 am

Email ThisBlogThis!Share to TwitterShare to FacebookShare to Pinterest
Labels: chickens, friends, self sufficiency

Sounds like you've got a great plan going there Melanie. I would agree, they seem like Rhode Island Reds as well, IMHO.

Finite number of eggs? A bit like women then!

If we were closer I'd happily buy your spare eggs.

Mmmm, fresh eggies! I've taken to stopping at roadside honesty boxes for things like eggs. They're so much nicer than mass-produced ones. I doubt you'll have any difficulty getting rid of spare eggs.

I didn't realise hens only had a certain number of eggs, either. I'm not sure I want to know how that affects battery hens - but that's a cop-out. I suppose I ought to find out...

You make it sound so easy - I'd love to keep a couple of chickens sometime in the future.

Your new chickens look lovely. One day I hope to have some in the garden, until then I just enviously eye up everyone elses! Enjoy the eggs.

Same here - would love some hens

I will admit there is nothing better than a hard boiled egg that came from your own garden.

They definitely are Rhode Island Reds. Keeping chickens is great fun. Enjoy all of your girls.