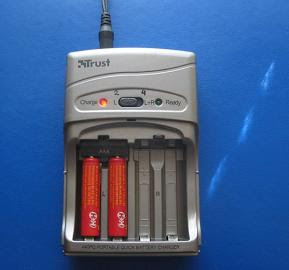 It's the same every Christmas. The kids get a bunch of new toys that all need batteries. But batteries are evil. Worldwide, 15 billion batteries are thrown away every year. They take around 50 times more energy to manufacture than they give out, so it's far better to run appliances from the mains whenever possible. They contain all kinds of nasties such as lead, mercury and cadmium (depending on the type of battery). If they have this symbol on the packaging:

(even if the letters below are different) then it's illegal to put them in the household waste - they must be recycled by UK law. Not that anyone does - fewer than 2% of batteries are recycled. But at least it means your local authority should have a scheme for you to recycle used batteries.

It's not realistic for most of us to avoid battery-powered devices all the time. So a battery recharger is an excellent investment. According to the website Battery Logic UK:

If you were to buy, for example, the Uniross X-Press 300 Charger for £12.99 including four NiMH rechargeable batteries,which can be recharged a thousand times, recharge the batteries five times, then as if by magic - you've got your money back!. (5 x £3= £15 which is what you would have spent on throwaway batteries). The next 995 charges are essentially FREE batteries. You could also save 3996 batteries from the landfill site over the lifetime of your Uniross rechargeable batteries!

Feel free to forget the sums. It's simple. Rechargeable x 1000 = Battery Logic : kind to your pocket - kind to the environment.

So that's the challenge for January. Get a battery recharger and use it. Oh, and recycle your disposable batteries as they run out. Don't forget to vote in the poll in the right-hand sidebar when you've done it.
Posted by Melanie Rimmer at 3:23 pm

Check! Got two actually - the plug-in one similar to yours back when we got a digital camera and more recently, a solar battery charger that requires no electricity at all. :)

Funny, I have two too. I have a plug in that covers all batteries (including the elusive 9 volt) and the solar powered one. My only problem is that some of the kids toys won't work with the rechargable batteries. Of course, I'd rather not have those kids toys but guess what my kids got for Xmas! So there you go.

When we were at the battery toys stage of family life, we had two or three of these, but - I ashamed to say - we don't really use them any more, don't really have many rechargeable batteries any more (except for the camera). So your challenge is a good one for me, because I'm definitely going to get back into the swing of this. Part of the key, I think, is to have plenty of spare batteries, and a place where everyone knows the charger will be, so that they can always put dead batteries into it when they take them out of whatever toy has stopped working.

Could you make it January AND February's challenge? ;)

I'm a fan of rechargeable batteries. They've improved over recent years and are much more powerful - look for the mA ratings. For AA's, 1300mA are the cheapest and least powerful, and they go up to 2700mA. Also, there is a new breed of rechargeables that hold their power (rechargable's power disapates fairly quickly, so they are best used in a high drain things like camera's). It kind of provides a cross of disposable and rechargeable. For Uniross, they are called Hybrio. Others have their versions, but the brand names escape me! Also, you can buy fast chargers that will charge your batteries in as short a time as 15 minutes.

I'm going on here - sorry, but your on a favorite subject of mine! Use rechargables!

I have had a charger for a few years since I bought a digital camera, we only use rechargables now for toys, the alarm, smoke alarm and many toys that require them(POLISHES HALO !!)
If you shop in Lidls keep your eyes open as they do very good deals on rechargable batteries, that's where we get all ours !

Aldi and Lidl both have very cheap AA and AAA batteries from time to time. We've found them very good indeed, the AA are around 2.1Ah and the AAA around 800mAh. At £2 or £2.50 a shot they're so cheap there's little reason not to use them.

We have a charging shelf where all the odd rechargeable things get zapped - the phones, the walkie-talkies, cameras, toothbrush, cordless drill etc. There's three tubs, one for charged AA, one for charged AAA and one for flats of all sorts. Alex, our son, is getting very good at noticing when a flat tub is getting full and running a few sets through.

What I Reallly Ought To Get Round To is making each charger individually switchable. At the moment they're often on even when not in use because they're all built in behind a sort of ziggurat thing. At the moment I can only switch it all off if nothing's charging.

Oh, and we've yet to find anything which won't work with NiMhs.

We have 4 rechargers between us and hardly ever use new batteries except for my portable DAB radio which won't use them.

I'd like to point out, though that they're not "free" after they've paid back their initial cost, because you still have to spend money on electricity for recharging.

Of course, Guy *would* have it so beautifully organised, wouldn't he? Do you sometimes want to smack him for being too perfect?

The larger Tesco's take old batteries for disposal, although the bin is usually tucked away in a corner near the row of tills - and the bin is shaped like a giant battery!

I have two rechargers, one which is for AA batteries or the flat ones and a newer one I bought a couple of years ago in Aldi which also does the bigger round batteries (and has a good tester to see if batteries are fully charged). Having said that, I don't have many things which need batteries. I bought a wind-up torch recently and also got a small wind-up torch for the car which has a connector to use it for an emergency charge on a mobile phone (2 minutes winding to get 2 minutes talking so really is only for emergencies).

I got a digital camera last year and when the batteries which came in it ran out I put in a couple of my rechargeable batteries but it didn't work. I brought it into a shop, thinking it was broken but the man there said that I needed stronger batteries. I can't remember exactly now, would have to look at the batteries again to know what the measurement was, in might be the mA others have referred to here. It was something to do with the amount of hours of power I think.

I think this is a great challenge. I got a battery recharger this past summer for exactly the same reason. We have a "fully charged" and "in need of charging" basket next to the charger to keep things organized. I want to know how Chile's solar charger works out.

Perfect? Hah! I'm about to spend the morning repairing the complete and utter cock-up I made of Alex's bed. It turns out that it wasn't made of stern enough stuff to withstand a 13 year old friend of his jumping on it from the top bunk. Several attempts at repair have resulted in unexpected nocturnal collapses, so today I'm going to set about it properly, using all that lovely plywood I scrounged from the school's skip.

If anyone in the Telford area wants any infant school sized plastic chairs by the way, I'm still rather over supplied.

I bought a battery recharger a while back, specifically because I was worried about the number of batteries my digital camera was using (all flower pics for the blog, of course!) but I've been a bit disappointed.

First of all, the batteries don't seem to retain the power. If you don't use them immediately after recharging, they just revert to dead. And now, after about six months, they take so long to recharge that I'm probably using more energy to do it than offsets the pollution I'm preventing. Have I just got a lousy recharger I wonder?

We're now gearing up for round 2 of the Garden Bloggers' Carnival -a bit different this time, in that I'm asking people to nominate a post from another person's blog. Full details on my blog today (Jan 3rd). I hope you'll participate again, like you did last time. And of course, if anyone else reads this, please join in!

I'm another one of those that started using rechargeable batteries when I got a digital camera a few years ago. I don't use many things that require batteries, just the camera and tv remotes, but I've now realised that I am not using rechargeable's as much as I could. So my challenge is to get some extra batteries for charging and use them instead. Thanks Mel!

A few people have mentioned solar battery chargers, but even better is a 12v battery charger for AA/AAA batteries. These can be powered by solar, wind turbines, car 12v sockets and, in some cases, from mains as well.

The best arrangement is to set up a 12v charging station.

Get a deep cycle 12v leisure battery, a solar panel and/or a small wind turbine to charge it, a 12v battery charger, a 12v socket to connect to the battery, some heavy duty automotive 12v wiring, and a voltage regulator to stop the battery overcharging.

The advantage of having the 12v battery is that you have a reserve of power for cloudy or windless days.

I am told that to get rechargeables which hold the power longer that you need the more expensive ones, there is a technical difference but I can't remember what. Whilst I absolutely agree that they must be better than ordinary batteries, I would question your figures for the financial cost, in an average child's toy rechargeables last rather less than half as long as standard batteries, so need a lot more recharging!

As for recycling facilities, we would have to drive several miles to recycle batteries, which means we would have to store used batteries until we had enough to make the journey economically and ecologically viable! So rechargeables would seem the way to go, if only they lasted better!

We have wind up torches now, but they anly seem to last a couple of years and then no longer charge properly so you have to throw the torch away!

I use rechargeable batteries whenever I can, because I find it cheaper than ordinary use-and-throw batteries. Plus, it is more environmentally-friendly that way! :D

Back up of BlackBerry Devices batteries are a much needed necessity and you do not want to be without power for your BlackBerry Devices. A spare battery will ensure that you are always prepared. It can extend your talk time and reduce worry about dying battery life if you are on a long call or listening to music. It's also great for safety on long trips especially when your battery is dying and there is no charger around. A spare battery that is charged and ready to go will do the trick.