10 Reasons to Cook with Quorn 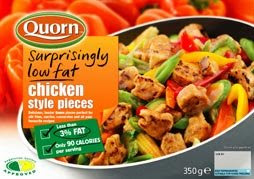 There are only four days left to participate in our Try A Vegetarian Meal Challenge. If you are running out of inspiration, here are ten good reasons to try a Quorn dish:

1. You can get Quorn chunks (which are rather like chunks of chicken), Quorn mince (which is like beef mince) and Quorn beef-style strips (which are self-explanatory).

2. Point 1. means that you can easily make many of your favourite meat-based recipes vegetarian. We like Quorn chili, Quorn lasagna, Quorn fajitas and Quorn Thai green curry, for example.

3. You can offer a vegetarian and non-veggie choice without all the trouble of making two totally separate meals, for example by making rice, Thai green curry sauce with vegetables, then pouring half the sauce over some heated Quorn chunks and the other half over cooked chicken pieces.

5. Quorn is much lower in fat than the meat it imitates, so it can be a healthier option, especially as, just like meat, it contains high-quality protein.

6. Unlike meat, Quorn contains fibre which also makes it a good addition to a healthy diet.

7. Because it is similar in taste and texture (not identical, but similar) to meat, it can help die-hard carnivores cut some of the meat out of their diets. You know, the sort of people who would sooner starve than knowingly eat a lentil.

8. Because you use it in the same sorts of recipes as meat, you don't have to learn a whole lot of new cooking skills (such as how to cook lentils).

9. Quorn is lower in calories than meat and contains no cholesterol. So if you're watching your weight or your cholesterol levels you can still enjoy some of your favourite meals just by switching to Quorn.

10. Boil some water and cook some spaghetti. Fry an onion, add a tin of tomatoes, a pack of Quorn mince, and some Italian mixed herbs. By the time the spaghetti is cooked, the sauce will be cooked, too (Quorn is already cooked, it just needs heating through). If you've got some Parmesan cheese, put that on top. If not, just forget it. Quorn spaghetti bolognese is just as quick as heating up a ready meal - much quicker than phoning for pizza delivery - and it's tastier and healthier than either.

What is Quorn anyway? It's made from a fungus that occurs naturally in soil. Sometimes it's described as "mushroom-based" - that's stretching it a bit. The fungus it's made from is a microscopic mould, not a mushroom like the ones you put in your omelette. On the other hand I've heard detractors describe it as genetically modified - that's not "stretching it a bit", it's just hooey. The FAQ page of the Quorn website states clearly:

A: The main component of all Quorn products is mycoprotein, which is not soya-based, but is a member of the mushroom family. This is grown and harvested under strict quality controls and we can therefore reassure you that it is not a product of genetic manipulation.

Quorn is approved by the Vegetarian Society who do not allow any GM ingredients in approved foods, so that's that. Anyway, they grow this stuff in huge vats, dry it out, then process it, adding egg white (as a binder) and flavours to make it resemble chicken, mince, sliced ham, or whatever. It's a processed food, but then again so is cheese.

It occurs to me that this article reads like an advert, so I'll just be clear. I have no affiliation to Quorn. They haven't paid me or asked me to write this or anything fishy like that. I'm just a satisfied customer. We probably eat Quorn about once a week in our house. The main reason is that it bridges the gap between the carnivores and the vegetarians in our family. If it was just up to me, I'd probably never eat it - when I felt like chicken fajitas I'd eat chicken, and when I felt like a vegetarian meal I'd make dishes based on beans, lentils, quinoa and all the other vegetarian protein sources I enjoy. I resisted using Quorn for a long time because it felt like cheating. It's not "natural", it's a factory-made processed food. But so is cheese, so is tofu, so is bread unless you make it at home. When I gave in I found that a lot of new dinner possibilities opened up to me. Instead of reading a recipe and thinking "That sounds really nice, but it contains meat. I'll have to wait till Steph visits and make it for the two of us", now I often read a recipe and think "That sounds really nice. I'll switch the chicken for Quorn and make it for me and Ed next week".

So it's your last chance to join in the Try A Vegetarian Meal Challenge. Why not try converting your favourite chicken or mince-based dish to Quorn? Don't forget to vote in the poll in the right-hand sidebar when you've done it.
Posted by Melanie Rimmer at 10:42 am

Why have I never heard of Quorn? I went vegetarian for a year and had all sorts of digestive problems and issues with not getting enough protein in my diet. Does Quorn provide protein? Also, is it available in your regular supermarket. I live in a small town in Colorado where we have no Wild Oats or Whole Foods.

Mmm, but I can I barbeque it? And in Africa? Well, let's just say that Quorn won't go down well...

hey, here is the site i was talking about where i made the extra cash, I was making about $900 extra a month...
check it out ..

i like it also because it's soy-free, which helps with people who have trouble with soy. also, their "naked chik'n cutlets" are great for picky children.

Once again, your fact checking has been found wanting.

One of Quorn's chief ingredients is egg whites. Most people who identify as vegetarian (not vegan) don't eat eggs, thus precluding Quorn as a vegetarian meal. Also, you'll have some people use chicken or beef broth with it, furthering it away.

My personal favourite Quorn dish is to make it into a burger, and apply it to an open grill. But there's no way you can mistake it for a veg meal.

I find the sausages a bit suspicious. It’s certainly not sausage! I like your Tofu analogy. Can you buy it in it’s natural state I wonder, I think most of the products are flavoured, but I don’t know.

In the future could we be using it as a food stuff in it’s own right rather than a mimic of meat? It is a great source of cheap, low carbon, protein.

P.S. Lord 3D: I see egg white is added, but not that it is a ‘chief’ ingredient and what’s all this about chicken and beef broth (?) I hardly see why that is relevant. Don’t try and nit pick a well thought out balanced article for ‘fact checking’, get it wrong, miss the point, and quote a Wikipedia article as though it is authorative, you are a knob.

Sadly we can't buy quorn or tofu here (ate loads when we lives in London) and we miss them! We're waiting for French supermarkets to catch up with the modern world - probably only have to wait another, say, 20 years?!

it's not that the fraench are behind the modern world so much as that they - don't do veggie.