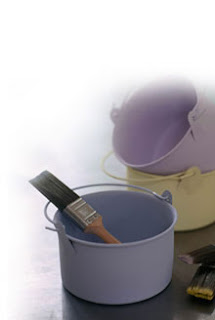 Steph and I went to Homebase today and we spotted a range of eco paints by earthBorn. earthBorn paints are environmentally friendlier because they're VOC free. VOCs are volatile organic compounds - they're the nasties in paint and other things such as paint strippers. They're also what makes new carpets stink, and other plastic things like that. Sick Building Syndrome is thought to be caused by VOCs in paint and carpets etc. They're unpleasant pollutants in the air and water, but confusingly they're also emitted in large quantities by trees, which is why Ronald Regan once said:

Trees cause more pollution than automobiles do.

The Great Smoky Mountains in the Appalachians are so called because of the VOCs released by trees in the area, causing a persistent orange smog. To put it into perspective, though, trees also absorb carbon dioxide and give out oxygen, so overall they do more good than harm. The same is probably not true of automobiles or emulsion paint. So if it's possible to make paint without the VOCs it sounds like a good thing to me.

I was surprised to find eco paints in a big DIY chain like Homebase. I thought I'd have to order them off the internet, or maybe drive miles to some small retailer off the beaten track. Next time Stephanie talks me into redecorating a room, we'll head to Homebase and look at the earthBorn paints. I still want to do more research about eco paints and VOCs, but this is a start.
Posted by Melanie Rimmer at 9:40 pm

I was just wondering - is there much price difference between eco paints and 'normal' paints?

Very interesting. We're planning a lot of repainting, and since a Homebase just opened within walking distance these could be doubly eco :)

At least they could be if our Homebase stocked them. Oh well.. Might have to drive to another one, that's all.

When we used this type of paint recently, it didn't smell so bad or so long while it was drying, even though the house was closed up for the winter. I used to put off painting until we could open windows, but now I will have no excuse!

Regular paint makes me feel sick and gives me terrible headaches, so I'm very excited to see more and more VOC free options on the market. We've got a big "fixer upper" of a house that will need a lot of painting someday.

I've had trouble finding low VOC paints in some colours. Particularly, I wanted a deep blue gloss for some shelf uprights and couldn't find any anywhere.

When you do find it, it's generally very good - the finish isn't as good as a traditional gloss, but that's OK, my furniture isn't a masterpiece anyway, it's just to keep stuff off the floor. The two things I like best about it are the fast drying time and the lack of stench.

No offense, but where in the world did you get that magoo about the Smokies? There is no "persistent orange smog" there although there is a huge amount of auto pollution during tourist season. The smokies are called that because it is a very moist area and has lots of fog and low lying clouds that lay in the soft folds and valleys. Orange smog from trees indeed, sounds like Ronald Reagan's school of ecology.

We've been trying to aggregate some consumer opinion information on these paints at Huddler's Green Home community.

It's trickling in, but we could use a hand getting the word out on the importance of indoor air quality, the danger of VOCs and which ones you would recommend. Beyond that, we've just worked hard on the site in general, so I hope you enjoy it. Keep up the great work on the blog!

Good one - shall be interested to follow your research - as I have a couple of rooms to repaint soon and will be buying eco paint. I intend to get a "gold star" type - the bestest there is "greenwise" on the market and am watching the DIY chains to see when they start stocking it. My preference is to just be able to nip into B & Q and just get that - rather than having to do the internet shop bit (hate buying over Internet if I can help it). I used to buy Dulux - which I guess is probably about £14 per standard-size can now. Obviously dont want to flash cash needlessly - but am not that bothered at thought of paying say £30 if I have to (after all - how often does one decorate? - I only think in terms of doing it when necessary anyway (I estimate that could be say 5 yearly for kitchen, 10 yearly for bathroom, 15-20 yearly for everywhere else inside house). Put like that - its not much extra p.a. at all.

Sorry to say, but you need to check some facts on the Smokey Mountains. I know we're across the sea, but a minute on google would have cleared that up.

Its MIST, not literal smoke. And the only times this gal (who's hike quite a few parts of it, also lived amongst it as well) has ever seen orange is during a particularly weird sunset when we had gotten fogged in.

The mountains get a huge amount of rain and therefor are usually more then a bit misty.

Hi, just to respond to the comments about the Great Smoky Mountains: I had never heard of them before last week (I live in England and am not familiar with all of America's national parks. I bet most Americans have never heard of England's Peak Districkt either). I was doing some internet research into the quote about trees causing more pollution than cars, and I came across an article in The Guardian newspaper which included the statement about the Great Smoky Mountains taking their name from smog caused by VOCs from the trees. The article is here

So I looked for another source that agreed with this statement about the smog over the mountains, and found one at Wikipedia, here.

Since a couple of Bean Sprouts readers have challenged this fact I have done more internet research and found more sources. This website says "The mountains are named for the smokelike haze that envelops them" although it doesn't specify the cause of the haze. This website says "The Smokies are named for the blue mist that always seems to hover around the peaks and valleys. The Cherokee called them shaconage, (shah-con-ah-jey) or "place of the blue smoke"." I've seen the mist described as orange in some websites and blue in others.

Maybe all these sites are wrong, they could all be quoting from the same unreliable source. But I wrote the sentence in good faith, having found two independent sources that agreed upon it, and not having seen any other explanation which contradicted ait apart from ambiguity about the colour of the mist.

I'm doing more research about VOCs. It's very interesting. When you think about it, a volatile organic chemical is anything natural that smells. The smell of cut grass is caused by VOCs, so is the smell of lemons or onions. So it seems that the idea that VOCs are always bad is too simplistic, and maybe they're not a helpful classification at all. I'll keep researching and I'll tell you what I find.

Just found a link - on from the Dervaes website on making your own paints. Could be worth a look:

whoops...that didnt quite work, the end bit is missing

is the last two segments of link.

I know it's online, but these people both have their own range of eco paints and stock others too. They will send you a brochure with it all if you ask.

For starters, should know better than to trust most of what you read in The Gaurdian. None of your sources mention any 'smog' in relation to the Smoky Moutains - only that some trees release some chemicals related to photochemical smog. Had you actually read your sources, you would know this. You might also at that point be in possesion of the knowledge that which you yourself parroted later - that the mist surrounding the questioned mountain rainge is indeed blueish white, not orange. Why else would the original name of the place be "place of the blue smoke" - again citing your own example. Having seen it myself, I can verify this. As others have pointed out, this is from what are essentially low lying cloud formations in the valleys of the mountains. The Smokies are one of America's most beautiful, scenic landmarks - true standouts in a country chock full of them. What you have done here is essentially the same as saying that they've strip-mined Peak District.

Really, this is by far not the first time you've played loosely with your fact-checking. I could toss your flagrant plagarism into the ring for good effect as well. Can't forget then the odd bit here and there of demeaning comments on other's blogs... For someone who spouts off as one of the 50 most powerful bloggers in the world, I for one find this, well... Plain old bad form.