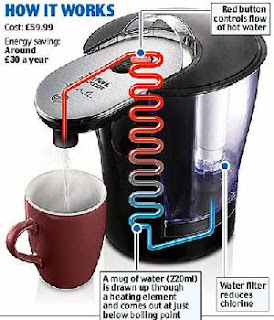 I'm not normally a huge fan of eco gadgets. If anyone asked me "What should I buy to save the planet?" my answer would be "Less. Just buy less."

But my sister, Lindsey, turned up at my house this afternoon with her new green purchase - a Tefal Quick Cup. It's a sort of space age kettle that pumps the water out of a reservoir and heats it up as you need it - like a combi boiler for your hot drinks. If you just want a single cup of coffee you can have it in a few seconds rather than the few minutes it takes to boil an electric kettle.

Lindsey bought it because her husband, Andrew, has an incurable habit of boiling an entire kettle for a single cup of tea. Lindsey has tried everything to cure him of this, and the Quick Cup is her latest approach. This is it's main selling point - it's an eco kettle because you only heat the water you use. About 1/4 of your household electricity usage is for heating water, and filling up the kettle to make a single cup of tea is a terrible eco-crime.

Tefal claims that the Quick Cup uses up to 65% less energy than a standard kettle, and that this is about £30 per year for a typical household. The gadget costs around £60, so the payback time is around 2 years if Tefal's figures are correct. It can also operate as a water filter using Claris cartridges, but if you don't care about filtering your water, or if you object to the waste of disposable plastic cartridges, you can just do without these - they're optional.

There are some drawbacks to the Quick Cup. It make a really unpleasant buzzing noise (it's probably the pump) when in operation. Of course, it's only in operation for a few seconds so that's not the end of the world. It is quite quick for a single cup, but if you had to make drinks for five or six people I'd prefer to switch on a kettle and then busy myself with putting the tea bags and sugars in the cups and so on whilst it comes to the boil, rather than have to stand pressing a button all that time. And I think the noise would really be driving me mad after five or six cups.

Another problem is that the Quick Cup doesn't actually boil the water. That's one way it saves energy I suppose. But a lot of commenters on HippyShopper's review complained that their tea didn't taste right because the water wasn't hot enough, although most of them thought it made coffee well enough. The tea tastes OK to me, although I like my tea on the weak side so perhaps that's the reason. I took the temperature of a fresh cupful of water from the Quick Cup and it was about 75°, compared to about 85° for a cup freshly poured from a kettle. Why wasn't it 100° fresh from the kettle? I guess it cools down a lot when poured into a cold cup. Because water comes out cooler from the Quick Cup you can drink it faster. You might find that a bonus. On the other hand, it goes cold sooner too. So I can see that some people might love it and some might hate it, depending on their individual preferences and habits.

Finally, the Quick Cup draws energy when on standby. Most electric kettles don't draw any energy when they're not actually boiling, so I wonder if the energy savings of the Quick Cup are wiped out by the standby costs? Lindsey says she'll switch hers off at the mains when it's not in use. That's a good plan, but why not just build it so when it's off, it's off?

Lindsey likes her tea much weaker even than I drink it, so she' ll probably be happy with her new purchase if she can get used to the noise. And if it cures Andrew of his eco-crime then it's a good choice for them. But I won't be rushing out to buy one myself.
Posted by Melanie Rimmer at 4:05 pm

looks like you and I will be sharing adjoining cells in the eco-prison this week, Mel!!

but it's a fair cop, I'll come quietly! I dread to think of how much energy, not to mention time, I've wasted boiling half of Windermere just to make one latte.

It raises a really good point though, and one which you've raised many times before on your blog, which is that maybe the heart of having an eco-conciousness (sorry, I'm mixing my biological metaphors a little here!) isn't going out and doing some big, dramatic ecological gesture, it's being more aware of all of the myriad tiny little changes that you can make, almost without noticing, that together contribute a far bigger step towards a greener lifestyle.

Also hopefully it won't blow up like the first one did!!

Heating one cup of water from 5C to 85C, say four times a day.

Anonymous - I'm pretty sure I had that question on my O'Level physics paper.

Actually, the answer is dead easy. It's the first option. Because it takes exactly the same energy to heat one cup of water from 5 to 85 four times as it does to heat four cups once. But in the second option you then have to reheat each cup, which takes extra energy. That is, assuming a perfectly efficient water heater, which is unlikely in practice, but working out exactly how much energy is wasted by the device is beyond the scope of this book. At least that's what it alwasy said in my O'level physics textbook.

Or, you could heat four cups at one time in a normal kettle, then stick it in a thermos for use during the day.

Ok, I've now had a whole evening to play with my new toy, and I have to say: I'm a convert!

To anonymous: I don't understand your question in this context. How is my tap water that much cooler than room tempreature? Am I being dim??

Plus, I am the only person in my household who drinks hot drinks, so I am heating precisely one cup of water per drink from room temperature.

I have kept my kettle, obviously, as it's a lot more efficient for boiling water for, say, pasta than my electric hob.

Mel: the noise was a concern, but it's actually fine. My kettle made a much higher pitched sound, and I had to pause vids/dvds as I couldn't hear them.

I've just watched Liverpool hammer Arsenal, made 3 cups of tea, and could hear the commentary from the kitchen the whole time!

I'm git chuffed with it

Your blog reminded me of a similar kettle I'd read about recently called the Eco Kettle. See http://www.ecokettle.com/ECOKETTLE.htm. The idea is that when you fill the kettle the water goes into a resevoir which you then tap into every time you wish to boil one or more cups. It claims a 30% saving on standard kettles and costs approximately £30.

I wanted one but could not justify getting rid of my existing kettle as long as it continued to work. However it has now started to play up so it may not be very long before I order one. When I do I shall be sure to report back on its performance.

Does it actually produce boiling (100 degree) water, or just very hot water? If it's not actually at boiling point when it hits your tea, you won't get a good cuppa (which most people don't seem to care about or notice, but it's something to consider)

It heats water to 90 degrees, so strictly speaking your tea is not the whole 'warm the pot and stew for 4.36 minutes' British perfect cuppa.

I have just had some Twinings' Earl Grey out of it, and by my standards it was a lovely cup. And I drink a *lot* of tea.

90 degrees for my tea is more than adequate for me, and I've not noticed any change in taste.

I do appreciate that it's not for everyone and, assuming it doesn't fuse my circuit board like the first one I bought did (!), then the convenience of instant tea outweighs any negatives. I just hope it doesn't break down as some have reportedly done in a few week.

It's getting a hammering though!

Benjymous> please could you define for a "a good cuppa"? I was labouring under the clear masapprehension that it means "a cuppa I enjoy", the "I" being the person who is drinking it. Not some Victorian who invents the perfect tea making procedure.

Im sorry to be antagonistic, but I have been lurking for some time and read something I just had to comment on.

I suspect the biggest problem with it will be a short lifespan. I doubt it'll still be working in two years time, so the embedded carbon cost will be quite high.
We've had our kettle for over ten years - by now the embedded costs have been lost in the mists of time.

Here's another thought - we have an expresso machine which only heats the water you put in - and woe betide you if you do too much 'cos you get coffee all over the place.

I'm not a tea drinker, but what would happen if you put a teabag in the coffee basket of an expresso machine?

i have been nibbling away at the electricity bill for a long time. my latest effort is to use my coffee brewer only to brew the coffee and then transfer it to an insulated carafe instead of keeping it warm on the brewer itself. if i save an hour or two a day at about 800 watts that's pretty significant over the long term. in fact, the payback on the carafe was about two months.

When we got a new kitchen a few years back, I insisted on installation of a hot water spigot. So, if I want a cup of tea, I just use my hot water spigot...and it's REALLY hot. Much more economical than any kettle!

The question now is, did the old kettle die? And did the new on come from China?
Also in the winter if you have a wood burning stove you can heat water in a stove top kettle and then top it up on the stove or in a conventional kettle.

Alice: That's a very valid point. I suppose us Brits look down on the Americans for not knowing how to make tea - I'm sure those in the East look down on us too (I've heard it say that we effectively get the "sweepings from the floor" and all the best tea goes to the middle east)

Thanks for reviewing this product, i'd seen the ads on tv and wondered how good it is.

How to make a cup of tea:

No other way of doing it I'm afraid. Anything else is heresy unless of course you're using a fine darjeeling or green tea which doesn't need milk.

I think it's very funny that I've been blogging about man-made climate change, vegetarianism, consumerism and other controversial topics for years, but the subject that has stirred up the strongest feelings amongst my readers is how to make a proper cup of tea. It's great being British!