Carnival of the Green #84

Bean Sprouts is excited to be hosting its first Carnival of the Green - the weekly round-up of articles from the green blogosphere. Last week's host was Dianovo, and the next Carnival will be held on July 9th at The Ester Republic.

The Great Outdoors
Let's kick off with Don, who writes in Evangelical Ecologist about a Bible vacation summer school with an environmental theme. Sounds like a good idea to me, but I sympathise with Don's observation that he learned more about both God and the environment from going camping with his parents than from Bible vacation camp. In another post he argues that churches need to close the credibility gap, "if they want to demonstrate leadership over social issues like the environment they must have a good track record leading folks in spiritual matters within their own congregations".

Richard Runs for the Ribble on Save The Ribble blog. I used to work in Whalley, near Clitheroe, in the beautiful misty Ribble valley under the shadow of Pendle Hill, so I was delighted to receive this link. Unfortunately I can see no way of sponsoring Richard via the site. I'd advise him to set up a Justgiving page.
Big Coal: The Dirty Secret Behind America's Energy Future by Jeff Goodellsupporters of the late New Zealand atmospheric scientist August “Augie” Auer, although Phil of Phil for Humanity is of the opinion that man made climate change is still unproven, and more research is needed. With you on the "more research" bit, Phil.
Reassessing the Extent of Deforestation in Madagascar he quotes a recent study which seems to show that a surveyed area of the tropical dry forests of Madagascar have suffered less extensive deforestation than was previously thought. What is more, since 1993 the forests have been regrowing at a faster rate than had been predicted. But Mark of blogfish is depressed by all the bad news oceanographers keep delivering, and says we need to do better at inspiring people with our conservation messages.

Transport
Hybrid Car Review asks how much gas have hybrids saved? And the answer seems to be - not a lot so far, but as they become more widespread the savings should be significant. So it's good to hear that Google.com will lease 100 Toyota Priuses for their employee car sharing program, as Nick reports in Triplepundit. 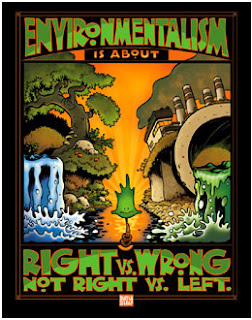 Anarchists in broad-based environmental campaigns.Justin presents Republicans vs. Democrats: Our Political Downfall posted at Politics & Religion. The points he makes apply to the UK just as well as the USA, and probably other countries, too. Combative party politics seem to work to the detriment of people and the natural environment. Reminds me of the Rustle The Leaf poster - the environment's not about right vs. left, it's about right vs. wrong.

Harlan of Greener Magazine thinks that using the Internet, particularly blogging, is becoming an increasingly common method for elected officials and public agencies to communicate with constituencies. But, he asks, at what cost?

And David of Ecolibertarian is frustrated by the clumsiness of government attempts to encourage lower–carbon-emitting lifestyles and business practices in Britain, as he expresses in his post Small is Difficult.
Natural Family Living BlogGive your bathroom a green makeoverAnd check out Mallory's article over on Miss Malaprop about recycled jewellery and other items which she refers to as "Trashion".
Doug of Doug Green's Garden submitted an online seminar about taking care of lawns and gardens using only organic techniques. That's right up my street, Doug - organic isn't only for growing fruit and veg, it's a way to garden in harmony with nature, to the benefit of plants and animals and ourselves. For example domestic pesticide use can be a threat to birds who eat the poisoned bugs; The Blue Voice reports that many of Americas common birds are declining, in the post Losing the Birds. John of A DC Birding Blog notes the same phenomenon, which he attributes to new housing developments.
article What is the best way for humans to live? What balance between human and natural resources, between space and society, is ideal for the sustainability of a human community?

At Money Changes Things there is a report about two communities which have banned plastic bags. That seems to be a good way to go. And Leon of Sox First has noticed that investment in sustainable energy is climbing to record levels on the back of concern over climate change, high oil prices and growing government support

Posted by Melanie Rimmer at 7:46 am

hi,
all the links in the "politics" section don't work.

So sorry. Thanks for letting me know. They've been fixed now, and all links have been checked. If there are any other problems, do let me know straight away.

Nice work! Thanks for hosting!

Hi Melanie - great post - I particularly enjoyed the Greener Magazine's Communicate with Contituencies Link, especially as our local councillors are not only commenting on local blogs but also hosting their own.

Thanks for the posts, Mel, and for putting up with my chutzpa!

Thanks for hosting the Carnival. I'm impressed by all of the variety and great ideas.