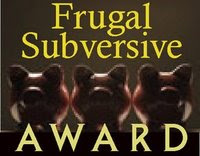 One of the proudest moments in my life was my leaving party on my last day of working in a large mental institution. There's this thing called "institutionalisation" which means that people in an institution, both inmates and staff, change to conform to the requirements of the place. They often take these habits home with them, for example insisting that meals be served at a set time and becoming quite agitated if their routines are broken (working there was quite good practice for having children with Asperger's Syndrome, come to think of it). I'd been there for three years, and at my leaving party my boss said that I had never become institutionalised, and described me as a "maverick". I don't think he meant it as a compliment, but I was more pleased than I can tell you. Of all the things I've ever been called in my life, I like "maverick" by far the best.

So I was very pleased when Scarecrow gave me the Frugal Subversive Award.
According to a dictionary meaning this award translates as:"A radical supporter of political or social revolution (by) Avoiding waste"
Or as Rhonda (who initiated this award) put it:"bloggers who consistently turn their backs on consumerism to live frugally in a creative and authentic way. These bloggers have made me think in innovative ways about my own life and how I can make a difference making, reusing, and just saying "no" to mindless spending."
I've got to tag Stonehead, who is one of the most vocal opponents of consumerism I know.
Stop the Ride is a frugal blog. I love her scientific approach to saving money, calculating the cost-per-ounce of different brands and taking nothing for granted.
Wombat is a friend from when I used to spend a lot of time on Self-Sufficientish. I keep saying I'll go back there because they're a great bunch, but I find it a terible time-sink. I log on for "just a few minutes" and suddenly find an hour has gone by. Its my fault, not theirs. But now I can keep up with Wombat by reading his blog about taking three months off work to try to be more self-sufficient in an urban Aussie back yard.
MEME RULES
1. When you are tagged, write a post with links to three blogs who have inspired you with their frugal creativity or innovation.
2. In your post, please link back to this post so that people can easily find the exact origin of the meme and save the award graphic.
3. Leave a comment or message for the bloggers you’re tagging, so they they know they're received the award.
4. Display the Frugal Subversive Award badge to identify your blog as part of the movement that is turning its back on consumerism at any cost.
Posted by Melanie Rimmer at 12:32 pm

I love this award! Thanks so much for including me!

Ha ha ha! I'm not a subversive as I don't seek to overthrow the system from within. No, I'm the ratbag outside throwing stones threw the windows while mumbling obscure diatribes in my beard.

Still, it's nice to be noticed, appreciated, tolerated etc, as there's no fun in being a madman on the streets unless you have an audience...