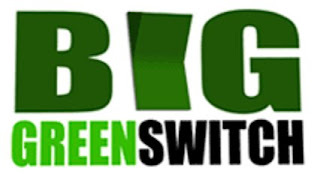 How are you all getting on with this month's challenge - to calculate your carbon footprint? I've found a great new website to help you reduce your footprint. It's called Big Green Switch, and it's a friendly, simple-to-use site aimed at the "keen to be green" - people who would like to become a bit greener but who aren't sure where to start.

For example, it has a list of fifteen suggestions to get started - simple but effective things you can do to green your lifestyle. And I was pleased to see a few things on there I haven't got around to myself yet, such as foil behind the radiators. That's a good idea for a future Bean Sprouts Challenge.

They also have a simple-to-use carbon footprint calculator (you'll need an electricity and a gas bill, and some idea of how many miles you drive per year). I just checked my footprint with it and it said I produce 5.81 tonnes of carbon per year, compared to the UK average of 9.4. Which isn't bad, but could still be a lot better when you consider that the worldwide average is 4 tonnes, and the average Indian, for example, produces 1.2 tonnes. Apparently domestic energy use is my downfall - above the UK average (probably because I work from home). Time to get some foil behind the radiators!
Posted by Melanie Rimmer at 8:10 am

Thanks so much for featuring us on your blog, it looks great!

The ten most popular pledges made so far have been:

- switching your TV off properly instead of leaving it on standby.
- cancelling junk mail to cut back on wasted paper.
- switching to low energy light bulbs.
- using reusable bags or boxes instead of plastic carrier bags when shopping.
- only boiling as much water as you need in the kettle when making a cuppa.
- foil-backing your radiators to stop heat escaping through the walls.
- cut down on pointless toilet flushes to save water.
- checking all your PC equipment is properly switched off along with your computer.
- switching of your car's engine when stationary for more than a minute.
- using dryer balls in your tumble dryer to reduce drying time.

I hope some of your readers will be interested in getting involved too - we have hundreds of energy, water and money saving tips on www.biggreenswitch.co.uk

An interesting topic. My Mother lived through the war in London and never got out of the habit of being thrifty with everything. She is just the Queen of energy saving! we can learn so much by looking back through recent history. Everything's come full circle! "waste not want not"