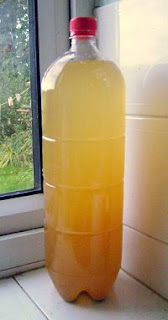 I gave "son of Fred" to my sister, Steph, who returned from Vienna last night with presents of Austrian chocolates and Himbeerlikör (raspberry liqueur). So now she has her own authentic ginger beer plant culture to make home-made ginger beer, and share the culture with her friends in Sunderland.

The original Fred has been made up again into another brew. I'll feed him a spoonful of ginger and a spoonful of sugar every day for a week, and then we'll make some more ginger beer. I was never a fizzy drink fan, but it's a thrill having home-made soft drinks on tap.
Posted by Melanie Rimmer at 4:24 pm

Email ThisBlogThis!Share to TwitterShare to FacebookShare to Pinterest
Labels: brewing, drinks, self sufficiency

Fred & Ginge are looking good. And of course, in the spring, you'll be able to do much the same with Elderflowers to make 'champagne'