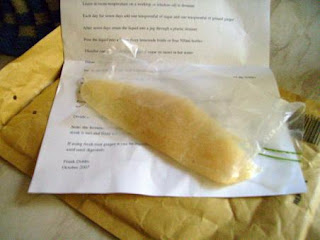 Well mine arrived in the post this morning, sent by a lovely man in Ulster 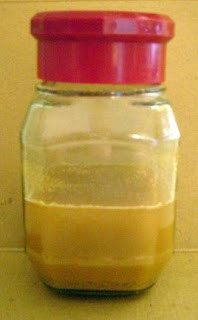 who I contacted via the internet. When it arrived in a ziploc bag inside a jiffy bag, it looked like pale yellow beads of jelly. It smelled fresh and slightly gingery. I made it up according to his instructions, by mixing it with water, sugar and ginger in a loosely-capped coffee jar. Since my yeast culture ginger beer plant is called Ginger, I have named this one Fred.

I will let you know how Fred progresses. I can't wait to make him into ginger beer, and I'm keen to compare ginger beer made this way, with the yeast culture I already have.
Posted by Melanie Rimmer at 5:39 pm

How exciting! You've also provided the perfect opening for me to ask you questions about your second batch of ginger beer. I assume by now, it's been bottled and perhaps sampled. How did it come out compared to the first? Stronger? Did you feed it only sugar or more ginger as well?

Just in case we didn't like it, we put the culture in the fridge until we had a chance to sample the bottled brew. We're pretty happy with the first batch, so I just revived "Ginger" this morning. Maybe one day, I'll have a real ginger beer plant too....but first I'll wait for a report from your experiements with it. :)

Nurse it like a baby, Mel. I adore ginger beer and expect to be fed it by the gallon over Christmas.

Oh, I would love to know where to get a real ginger beer plant from? I'd love to buy one.

I read this the other day and have sinced trawled the internet trying to find where I can get a ginger beer plant as a starter.

As soon as I start looking for the 'advanced' version you come up top in the search engines!

Certainly, Rob. Drop me an email (use the "Click here to email Melanie" link in the right-hand sidebar) and send me your home address. I'll send you some next time I divide Fred.

How's the plant going now? Did you source the culture in the UK and if so, can you put a link to a supplier? I have been trying but failing to obtain one. With thanks