A Rare Month for Boys 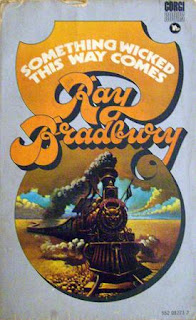 It was the day my grandmother exploded.

How cool is that? How could you not read on?

Last night I dreamed I went to Manderley again.

I like the rest of those books as well, not just their first lines, and have re-read them many times. Sometimes though a book fails to meet the promise of its first line. For example, I think Dickens' famous A Tale of Two Cities has a fantastic first line:

and a wonderful last line:

but none of the lines in between are nearly as good. You may think me a philistine, but that's my opinion.

At the moment I am re-reading Something Wicked This Way Comes by Ray Bradbury, as I do once a year without fail. Its opening line is:

First of all, it was October, a rare month for boys.

Which I think is a seriously yummy first line. No surprise, really, Ray Bradbury can truly write. Some science fiction authors rely on inventive story lines (few rely on in-depth characterisation) but Bradbury can write. In Something Wicked he has a Jack Kerouac-beat-thing going, but tamed and set to a definite purpose. His purpose is to explore the nature of age and aging, of youth and growing up and old age. It's a coming of age novel in which the young heroes come to terms with change, and so does the old hero. It's hard to say which of them finds the process more difficult. There's also a seriously creepy evil carnival, a humble town library which becomes increasingly important as the novel progresses, and provides some of the best protection and ammunition against the bad guys (Buffy the Vampire Slayer owes this book a major debt), a scary train, a terrifying hot-air balloon. It also has without a doubt the best chapter of any book ever. I reproduce it here in its entirety: 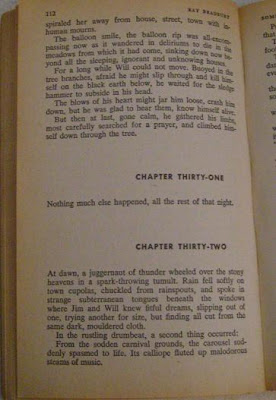 I hope I'm whetting your appetite. If you haven't read this book you really should.

And you should read it now, in October, when the leaves are falling and the nights close in early and it's not quite cold enough for gloves and hats but cold enough to make your bare fingers tingle and ears ache. And if there's a carnival that visits your area around this time of year, so much the better.
Posted by Melanie Rimmer at 12:35 pm

Email ThisBlogThis!Share to TwitterShare to FacebookShare to Pinterest
Labels: books

You're right that first lines can really grab you...or not. At a talk by a book reviewer, she stressed that she selected which books to review based on whether the first page grabbed her. She simply did not have the time to have a book grow on her due to the hundreds sent to her every week. Since then, I've paid far more attention to whether a book grabs me quickly or not. I'd rather spend my time reading good books than waste it on bad!

Something Wicked is one of my favorite books of all time. I wish I had time to read right now! I'm glad you highlighted it, as I had somehow let the fabulous nature of the book slip out of my mind.

And of course no one could ever forget 'in a hole in the ground there lived a Hobbit', 10 words which Tolkein always insisted he had no idea what on earth made him write down, but have now been read more times than the bible (allegedly), earned untold millions, and put New Zealand on the map (although quite a few Mauri's would argue that it didn't need to be on a map because they were quite sure of where it was to start with, thank you very much, before all these strangers with European accents started turning up!).

For last lines I don't think 'and wondered how anyone could ever imagine unquiet slumbers for the sleepers in that quiet earth' is just about unbeatable.

I wonder how many authors have found themselves with a killer line on their hands, and then had to search around for the story that it ought to belong to?

Having been a journalist, writer and editor, I like to collect first lines. My favourites include:

"It was a bright cold day in April, and the clocks were striking thirteen." - 1984

"All this happened, more or less." - Slaughterhouse Five.

"The sun shone, having no alternative, on the nothing new." - Murphy

"It was a wrong number that started it, the telephone ringing three times in the dead of night, and the voice on the other end asking for someone he was not." - City of Glass

"He was an old man who fished alone in a skiff in the Gulf Stream and he had gone eighty-four days now without taking a fish." - The Old Man and the Sea

"The past is a foreign country; they do things differently there." - The Go Between

And my top two?

"This is the story of Achilles' rage." - the Iliad

"William Connor was standing outside a disused cattleshed on a bright Highland summer's morning, ankle-deep in cowshit, liquidised mercenary raining splashily down about his head from the crisp blue sky above." - One Fine Day in the Middle of the Night

Melanie - I'm an author of three published books and I'd never stopped to think about the first line. First paragraph, first page, first chapter -- yes, first line -- no. You're right, the ones you chose are really amazing. It has given me something to think about. I can't do anything about the ones already published, but I'm working on four right now. Each one is going to get a full run down with a great first line with the rest of book following up on that promise. Thanks for posting about this today. I absolutely ADORE books!

Candace, I've infected your mind now! I bet the next few books you read, you'll evaluate the first line to decide whether it's really good, or so-so, or rather poor. You may even stand by the bookshelves in your home pulling out books and checking their first lines. Tell me if you find any good ones. Stonehead posted some real doozies a little way back up int the comments.

How about this one from Shaun Hutson, in the prologue:
"The slug's eye stalks waved slowly as it moved towards the crimson lump on which several of its companions were already feeding."