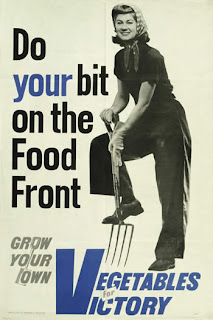 Ellie and Sam helped me plant loads of broad beans on the allotment last weekend. I like broad beans. They'll be one of the first crops we can eat next spring, but we've planted far more than we'll ever eat.

It doesn't matter, though. I had packets and packets of seeds that people had given me, so it costs nothing. And the land will be unoccupied over winter anyway. It's better that there's something growing on it rather than just leaving it bare for weeds to colonise, or for the soil to erode. The bean plants will add nitrogen to the soil, so the ground will be great for brassicas and other hungry crops next year.

I might be able to barter my surplus beans at the farm shop. But even if I just dig it back into the soil - basically use it as a green manure - it's a worthwhile thing to do.
Posted by Melanie Rimmer at 3:52 pm

UAB.. dig them in.. I find broad beans absolutely disgusting, but at least they are nitrogen fixers and the greenery will do the soil a bit of good.. that being said, some of the ripe beans can be quite pretty.. dried and varnished I suspect they could even be used for some sort of novelty jewellery..

Oh come on, Gid... have you never tasted the young pods (whole) steamed and tossed in butter with a few lardons? This is heaven indeed. Even if you thought you didn't like broad beans before, the taste is something else....c'mon... take up the challenge (as Mel might say.....)

We used to HATE broad beans- rubbery yucky things they were. Then hubby saw a cooking programme which inspired him, so we bought a bag of frozen ones, let them defrost and rubbed off the white skin/shell, and he lightly stir fried them. Delicious, delicate, moist..... I'll be interested in growing my own next year too.

So, the broad beans grow over the winter? Even through freezing? I am interested in growing fava beans, and know basically nothing about gardening. Would they work the same way? Anything else that could grow over winter? Thank you so much!