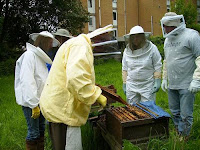 Last night I went to a Stockport Bee Keepers' Association meeting. Boy, am I hungover this morning. Those beekeepers really know how to party.

But it was a very interesting meeting, with a presentation by the Regional Bee Inspector, and a chance to catch up with my beekeeping pals. I'm also signed up for the beginner 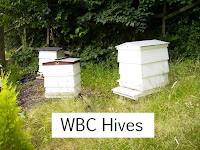 s' beekeeping course which starts next March. I tried to sign up for this last year, but I was too late, it was already full. I'm hoping it will be more detailed than the 2 day intensive course I attended in May.

So how are my bees doing? Not too bad. They're still alive and seem to be fine, but I can't really inspect them properly. If you remember they had been in a type of hive called a WBC, but these are difficult to move so when we fetched them from Wales to here we transferred them into a type of hive called a National. I was all set to transfer them back to their WBCs when they went berserk and attacked my neighbour (and his dog, and the postman, and another neighbour...) so I had to move them quickly to an out apiary. Not long after that w 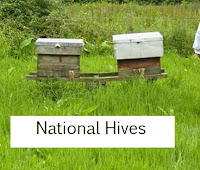 e went on holiday for a fortnight and one thing and another, they're still in the National hives now.

The problem is that WBC hives have ten frames in a box, but National hives have 11. If I'd known they would be in the Nationals for so long, I would have put blanking frames in
(that's a frame with no wax foundation or comb or anything, it's solid wood and just fills the gap where a frame would go). But I didn't, so the frames weren't spaced to exactly the "bee space" - the magic space which is big enough for bees to move around but narrow enough that they won't build comb in it. And now the bees have build "wild comb" in the gaps. Instead of having neat rows of comb that I can easily remove to inspect the brood, extract the honey etc, all the frames are fused together and I can't do anything. 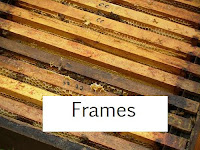 It can be fixed. I don't know exactly how but my bee gurus assure me it's fixable. But not until the spring when the weather warms up again and I can manipulate the bees without killing them by exposing them to cold. The task now is to make sure the bees can survive the winter, by figuring out how much honey stores they have (no easy task when you can't inspect the frames) and feeding them if necessary, and treating them for disease if necessary.
Posted by Melanie Rimmer at 9:36 am