Weed of the Week - Nettle 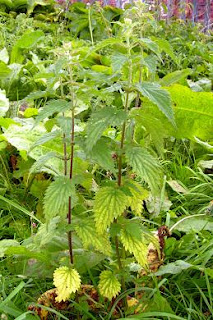 Does anyone really need a photo or a description to help them identify stinging nettles? I tell you what; if you're unsure whether a plant is a stinging nettle or not, brush up against it. If it hurts, it is one. Stop whimpering. Find yourself a dock leaf and crush the juice into the sting, it'll soon relieve the pain.

Nettles don't form such deep root systems as docks and so are easier to remove in that sense. However you have to wear gloves and a long-sleeved shirt made of fairly thick material, otherwise you'll end up with very sore hands and arms. But once you've pulled them up, you can throw them on the compost heap, make weed tea, or put them to many other uses.

I love to make them into delicious soup. I've also made them into soap. The least application of heat and their stings are totally disarmed - I saw Ray Mears on TV wilt them by holding them directly over a fire, and then he ate them. They're best in the spring; once summer gets well advanced they seem to become gritty, however well you wash them.

You can also make nettle beer, apparently, by boiling 2lb of nettles with the rind of 2 lemons and 1 gallon of water for 15 minutes. Strain into a container and add the juice of the 2 lemons, 1lb of sugar and 1oz cream of tartar. When cool, add 1oz yeast and leave in a covered container in a warm place for 3 days. Then strain into bottles, cork down and wire, and leave for 1 week before drinking. I've never tried this recipe, which comes from Marguerite Patten's out-of-print book 500 recipes for Home-Made Wines and Drinks, but next spring I'll give it a go.

There's even a website dedicated to nettle appreciation, where you can read about the importance of nettles to native British wildlife, and the uses of nettles as food, medicine, clothing (eep!) and in the garden. I wouldn't go that far, but I feel more kindly towards nettles than I do towards docks, for example. Not so kindly that I won't rip them out of my allotment when I find them. But kindly enough to appreciate the patch in the farmer's field behind our house. They're a useful resource, as long as they're growing on somebody else's land, not mine.
Posted by Melanie Rimmer at 9:25 am

Nettles have grown fantastically well this year in my garden ;)

I know you shouldn't eat old nettles unless you cook them hard (something like the need to cook kidney beans hard), but I imagine that you could make your wine out of old nettles without any problems

Ok, so I have another question for you, Mel. Is there anything that cannot be used to make beer or wine?! hehe

Actually, I'm really impressed with all your wine and beer-making adventures. Wouldn't want to be in the shrapnel range of the exploding beer bottles, but still....

I think through the ages thirsty people have found you can make wine or beer out of most things. Whether it tastes any good is a whole different issue.

That's a good point, Mel. In fact, it just occurred to me that fermenting was probably the easiest method of preservation, especially for fruits. Maybe the folks weren't really doing it for the alcohol buzz. Yeah, right....

So, when are you throwing the big "local drinks only" bash?!

Nettle ale is best made with the top six leaves of young nettles. Old nettles can taste bitter, while you should leave something for the insects that live on and around nettles.

Oh, and properly made nettle ale is extraordinarily delicious - I use two different recipes, one with dandelion as well and one without.

If you're not into nettle ale, try nettle pasta:

Method
Saute garlic in a little olive oil, then add the nettles, spinach and turnip tops. Cook until wilted, but do not allow them to turn brown.

Add salt and pepper to taste, then add the sauce and grated Parmigiano Reggiano to the hot pasta, and toss to mix.

And thanks for posting about nettles - I suddenly realised I'd drafted a couple of posts about them but never published them. So I've now caught up on some of my backlog!

Did you ever make your nettle beer Melanie? I have this post saved but never managed it next year. I hope to shape myself this time around ...