Weed of the Week - Dock 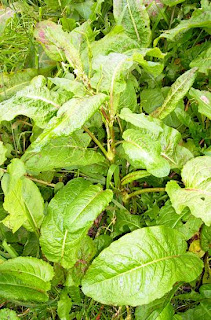 Dock is a common weed all over the place. I was familiar with it when I was a child, because it is the best remedy for nettle stings. You have to crush the dock leaf in your hands and apply the juice to the sting. It really does bring relief.

They're a pain in the veg patch, because they're a mite difficult to get rid of. Not as bad as bindweed, ground elder or couch grass, but a nuisance nonetheless. They form very long deep roots, and you can find yourself making an enormous hole as you strive to find the bottom of a big specimen. The roots are tough when they're thick, but as you dig deeper they are rather brittle when they become thinner. They tend to snap if you pull them, but if you leave the bottom in the ground it can regrow.

With their big broad leaves they're very easy to eradicate with weedkiller, but I don't like using poisons on my veg patch, so I just dig the buggers up. When they regrow I dig 'em up again. Nothing likes having its head repeatedly pulled off and they give up and die eventually. It's labour intensive, but I prefer it to nuking the whole plot with Roundup.

Apart from relieving nettle stings, and weed tea, I know of no use for them. You can't eat them, you can't smoke them, you can't make baskets out of them, you can't dry their roots, grind them up, and use them as a substitute for washing soda. Goats would probably eat them, but that doesn't make them special in any way. Goats will eat bicycle tyres.

Down with 'em, that's what I say. Docks - a useless and tiresome weed. Does anyone have anything to say in their defence?
Posted by Melanie Rimmer at 8:22 am

Even without that recipe Hedgewizard posted (although how long does it take to gather enough seeds?) the nettle sting remedy alone would be enough to make them worthy of respect. Even more so because they are often found growing right alongside stinging nettles, which is great news for those keen on harvesting nettley goodness.

You try it, Hedgie and then tell us a) whether it tastes any good and b) how long it takes to collect and grind enough seeds.

Hey, I don't remember volunteering for that! Actually I don't think it would take long to walk along a dock-infested piece of wasteland if you were so inclined - but it still doesn't make this thing a crop. Kill it, that's what I say.

Broad-leafed dock was traditionally used to wrap butter (hence butterdock) and I did read somewhere that research is being done into using dock extract to treat the symptoms of menopause.

But don't confuse broad-leafed dock with "dock pudding", which is a Yorkshire delicacy actually made with bistort. The distinction is important because broad-leaf dock is mildly poisonous!

Ahhh, you've just ID'd for me what I've been pondering about for the last week or so with it lurking around my garden - wonder if the chookies like it...

We raise sheep here in the US and it is the first thing the sheep like to dine on when turned out to parture.

Maybe I should invite some sheep to come and graze on my allotment.

"broad-leaf dock is mildly poisonous!"
Please explain the above quote. Just how mild is broad-leaf dock? We use it frequently in our Weed Soup. Am I going to DIE?