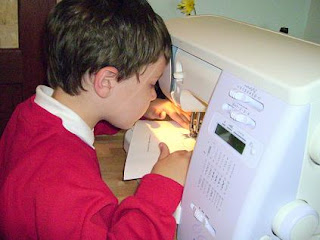 Eleanor wanted to learn to sew on the sewing machine, so I taught her the same way I learned - without any thread, following lines drawn onto paper. As she became more accurate following straight lines, I drew a square and taught her how to stop, change direction, and start again. When she had mastered that, I drew a spiral and taught her how to pilot the paper through the machine following the curve. Mostly it's about having the confidence to go slow, and looking at what's coming up, not what's happening directly below the needle. A lot like driving a car, come to think of it.

Sam wanted to try too, and he picked it up almost as quickly as Ellie did. I watched them all closely and they kept their fingers out of the way of the needle, so don't worry. I told them how my sister, Steph, put the needle of mum's old Singer machine through her finger when she was just a toddler, by climbing up on the treadle with her fingers on the needleplate. I think I gave them a healthy respect for a machine that can drive a needle through six layers of denim.

They can start sewing fabric next. I reckon they could make a Morsbag.
Posted by Melanie Rimmer at 5:37 pm

Setting up your own sweatshop, Mel? I suppose at least it's local...

I am 41 and am still scared of sewing machines because every year at school some girl had to be carted off to hospital with a needle through a finger. Never happened to me but I never got any confidence.

That's a shame, it's really not something that's likely to happen to a sober adult who is paying attention. Steph was just a toddler when it happened to her. She bears no scar and has no memory of the event, although I'd guess it haunted mum all her life.

I've sewn through my own skin whilst handsewing many times, but I've never injured myself whilst machine sewing. I did give myself a mild electric shock once sewing barefoot with a faulty footpedal, though.