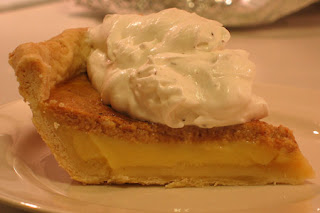 I set a competition on Thursday, asking "How can you cut an apple pie into eight pieces with three straight cuts?". The answer was:

Some people offered a slightly different solution, cutting the pie horizontally after cutting it in four. I don't think I'd be pleased to get a piece of apple pie with no crunchy piecrust on top. But I didn't specify "eight equally appetizing pieces" so I accepted this solution.

There were seven correct answers in all, and the winner (pulled out of a hat this morning by Eleanor) was Matt Shacklady of St. Helens. Congratulations, Matt. I gave the books to your mum and sister as as I passed through St Helens today. They seemed really nice. Say "hi" to them for me.
Posted by Melanie Rimmer at 7:25 pm

Congratulations to Matt for winning the prize and commiserations to me for not getting pulled out of the hat. Don't the runners-up get slices of pie instead?
While I accept that the eight recipients of the pie cut with three straight cuts might complain about not all getting both a bit of pie bottom and top but, from a practical perspective,I'd like to see you balance these eight pieces to make the final cut!
We look forward to you next competition, Melanie!

I'm a silly-billy! Too early on a Sunday morning. I realise that you're only balancing four pieces when making the final cut, so it's more reasonable. I'd need to take into account the curvature of the upper side of the pie, the coefficient of friction between the layers and the sogginess-rating to correctly calculate if the vertical-stacking method of cutting cake is feasible.

You're right. You should take an experimental approach. Make a variety of different apple pies and test out the hypothesis.

The main issue was just that the problem wasn't adequately specified - that's something you learn when working with computers - make sure you know what people actually want, rather than what they think they want.