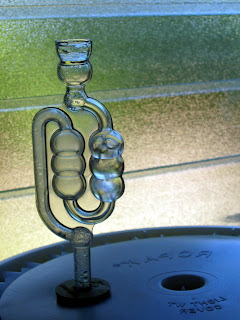 My damson wine stopped bubbling, which was a surprise. I expected the initial fermentation to last around three months or so, not two or three weeks. I tried giving it a good stir, but that had no effect. I moved it to a warmer place. No effect.

So I tasted the wine, to see if that gave any clues. The wine tasted pleasant, with no sign of mould or any other foreign microorganism that might have killed off my yeast. It tasted very slightly alcoholic, so the fermentation had been going well (as I knew from the activity there had been in the airlock before it ground to a halt). And it tasted very dry and sharp.

That was my answer. I had forgotten to add the sugar, and the fermentation had stopped when the yeast consumed the last of the natural sugar from the damsons. Doh!

But it was good news. At least it ought to be easy to fix. I added 20lbs of sugar. As you can imagine, this displaced quite a large volume of the wine, which I scooped off with a sterilised jug and tipped into the hedgerow wine in the adjacent bucket. I gave the now-sweetened damson wine a damn good stir. Then I waited.

There was a chance that the yeast had all starved to death, and I would need to add more yeast to get it going again. If that had happened, I planned to tip a cupful of the vigorously fermenting hedgerow wine back into the damson wine. But fortunately by the next morning the damson wine was bubbling merrily away.

So I'm working on a treatment for a new hit TV drama series, combining the growing public interest in sustainable living with the tried-and-tested appeal of CSI or Cracker. It's about an ex-forensic scientist who has downshifted to living on a smallholding. She brings her training in differential diagnosis and the Socratic method to bear on the problems presented by stuck batches of wine, chickens who mysteriously stop laying, and jam that refuses to set. What do you think?
Posted by Melanie Rimmer at 6:03 pm

Email ThisBlogThis!Share to TwitterShare to FacebookShare to Pinterest
Labels: brewing

A forensic scientist and a small-holding? Count me a viewer!

If you can franchise it to RTÉ1 or 2 then I'll be in there too.

I really enjoy your wine and cider making entries. I've been reading up on it lately, to start myself, been offered some demijons on freecycle, bought some bits in Wilkinsons and started collecting bottles, so almost there now. Really interesting blog, thanks.