(Renewable) Power to the People 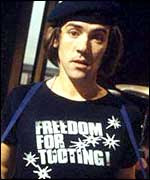 Growing up in Liverpool in the 1980s I was convinced that Margaret Thatcher was the sole cause of all ills, and that a Labour government would do a lot of good. Tony Blair severely disillusioned me about party politics. I started to believe that whoever gets elected, they just end up being the government anyway, doing all the same things that all the other governments do - go to war, blame the poor, help the rich get richer, help the powerful stay powerful, and feather their own nests in readiness for the day when the people grow sick of them and elect a different bunch, who will go on to behave exactly the same as the old lot.

But I've got a soft spot for the Liberal Democrats. For a while now they've been the most left-wing of the three mainstream parties. And now they also seem to be becoming the greenest. At the party conference in Brighton today they will vote on a motion calling for 30% of the UK's electricity to be produced from clean, non-carbon-emitting sources by 2020 - rising to 100% by 2050. The party leader Sir Menzies Campbell said

That's radical stuff, and I was astonished to hear it coming from a mainstream party leader on BBC1 Breakfast. He doesn't mean nuclear power either, although I think there is going to be a heated debate about that, both in Brighton and in the rest of the country in the coming few years.

Cameron loves talking about climate change as well. How long before number 10 starts setting deadlines for a carbon-neutral Britain, and the elimination of petrol-fueled cars?
Posted by Melanie Rimmer at 9:19 am

I know very little about politics and tend to agree with your view that they all tend to turn out the same way in the end.

However, I can't help but remember something my brother-in-law once said about the Lib Dems: "Of course they can promise the earth because they know they will never get in and have to deliver it".

The optimist in me thinks they sound great, but the pessimist agrees with my B-I-L. Plus, if they prove him wrong and get elected they then have to fight the urge to turn into "government" and do nothing but squander our money on wars we don't want in countries we care little about....

Well, I voted Lib-Dem at the last Scottish elections but not because of their policies. In fact, I'd be interested to see how they balance their swing to the right economically with their espousal of the environment and civil liberties.

But back to the point. I voted Lib-Dem purely and simply because we had a politician who was an outstanding constituency MSP. We emailed her on a Sunday afternoon with a serious problem and she was in touch - personally - within a couple of hours.

She'd then kept us informed about the progress in getting something done, and did actually manage to get a result.

And that wasn't a one-off either.

We had a similarly good constituency MP when we lived in Yorkshire (he was a Tory wet), an indifferent MP in Oxfordshire (Tory), a good one in south London (Lib-Dem) and a really bad one in east London (Labour).

As for our current MSP, it's Alex Salmond of whom the less said the better.

In some ways I'd like to vote Green, but a lot of their policies are naive and contradictory, especially when you move away from environmental issues. I don't vote Labour as there are far too many hypocrites, revisionists and U-turners, while the bulk of the Tories are so far right-wing they've fallen off the planet.

It doesn't really leave the voter much choice, so it was with some relief that I was able to vote for a good constituency MSP who is a member of a party I could tolerate.

It's hardly democracy in action, though, as far too often I've been left without any real choice as to who represents my interests in parliament.

I know it's not an original idea, but why can't we have "None of the above" when voting? Wouldn't that just keep them all on their toes? (And this from an unreformed OLD Labour man). I do like Stonehead's reasoning for his choice at voting time.

Well done, Stonehead. A good idea and another twist to the dragon's tail.