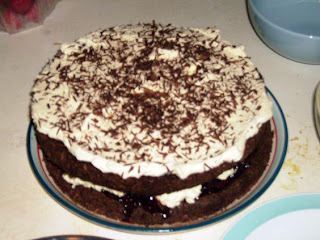 Black Forest Gateau
Separate 6 eggs. Beat the yolks until they thicken and become pale, then add 5oz sugar and continue beating until they thicken even more (but stop short of turning them into stiff glue). Now beat in 2oz cocoa powder until well mixed. Beat the egg whites until they form soft peaks. (If you only have one egg beater, you must wash the beater scrupulously in hot soapy water and dry well after beating the yolks. If your beater has the least bit of grease on it, the whites will never peak). Gently fold the chocolate mixture into the egg whites. This is the skillful bit, because they need to be well mixed but you don't want to knock all the air out of the beaten whites. Spread the mixture into two 9" loose bottomed cake tins, greased and floured, then bake at 180C/Gas 4 until the cakes are risen and springy, about 15 minutes.

Let the cakes cool, then place one on a serving plate and spread a small jar of home-made cherry jam all over it. Smother the other cake with whipped cream and carefully sandwich on 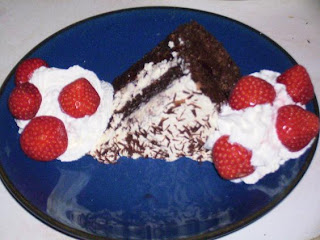 top of the first cake. Cover the lot with more whipped cream, and sprinkle some grated dark chocolate on top for decoration.

If you "don't like black forest gateau", try this anyway. It's not like the Tesco version, I promise.
Posted by Melanie Rimmer at 9:46 am