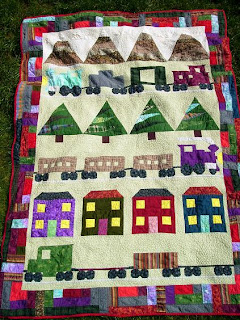 I made this quilt for Sam a year or two ago, when he was crazy about trains. That obsession seems to have dwindled now but I still think it's a great quilt.

I found the patterns for the engines and cars on the Chiloquilters' web site. The mountains, trees and houses I made up myself. The border is of half log cabin blocks in the same Thimbleberries-type colours as the quilt. The free motion machine quilting doesn't show up very well, but the background is mostly stippled except the sky behind the mountains which has puffy white unquilted clouds surrounded by stippling. The trains and log cabins are stitched in the ditch but otherwise unquilted, and the houses, trees and mountains have detailed quilted into them, such as curtains in the windows and bark on the trees.

Even though Sam is growing up (he's almost 6) and has left trains behind, he still gladly snuggles under this quilt every night. And just last night he asked for a Thomas the Tank Engine book as his bedtime story. It almost brought tears to my eyes.

I'm still accepting submissions for the quilt show. Email me your photos of any quilted or patchwork items, along with a little bit of information about who made it, when and why.
Posted by Melanie Rimmer at 12:24 pm

That quilt is gorgeous! Did you make up the pattern? I made a tractor duvet cover for my son when he was two, he's now 9 and still loes it, but it's not nearly as complex as your quilt!