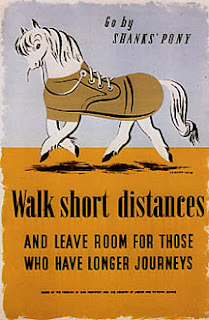 I noticed a story over on Eco Street blog about a group who have deflated the tyres of thousands of 4x4s as a protest against climate change. Because everybody knows that 4x4 drivers are the bad guys. Why is that?

The argument goes that 4x4s consume more petrol than smaller cars and so release more carbon and contribute more to climate change. Is that true? Well, it depends on what you are comparing with what. Some modern 4x4s are actually more fuel efficient than some older smaller cars. So if the protesters were targeting fuel-inefficient cars they would probably attack N-reg Ford Escorts and leave the 2005/6/7 4x4s alone.

But, the anti-4x4 people argue, 4x4s are not necessary in cities, they're not needed for the school run, they're just conspicuous consumption. OK, fair point. But some people do really need to drive a 4x4. Fellow blogger Stonehead, for example, lives on a croft in the Scottish highlands. A Prius wouldn't make it up the lane, much less pull a trailer with a pig in it. But he occasionally gets stick for driving a 4x4. I also know people who have huge customised wheelchairs, and need a large car to fit the chair in. Some of them find a 4x4 fits the bill. A Golf simply wouldn't.

Conversely I know people who have little cars which would escape the wrath of the activists, but who could easily fulfil all their transport needs by walking, cycling and using public transport. And I also know paid-up eco hippies who drive around town in an ancient VW camper van. It certainly looks the part, but it's guzzling fuel as it goes. Funny sort of eco hippy if you ask me, who cares more about their image than about the environment.

So if the activists could really target people guilty of conspicuous consumption, why don't they attack Bentleys and Porsches, pimped Fiestas and those little 2-seater MGs that probably have a great mpg and inspire envy even in total non-petrol-heads like me?

It's just all too simplistic. If these activists could have their wish come true, maybe they would wish all 4x4s would vanish off the roads forever. But that would leave farmers, disabled people and maybe other groups I haven't thought of, in an impossible position, probably without having much impact at all on climate change. A better wish might be to wish that it would suddenly become very unfashionable to drive an over-specified car. It would be considered terribly crass to take your kids to school in a 4x4 unless you live on the side of a mountain. And everyone would be proud of their 2-seaters and their 2-doors and their hybrids, or even better if they could get rid of the car and cycle everywhere instead, that would be très chic. Stonehead would still have his Land Rover. He needs it after all and doesn't give a damn about what's fashionable anyway. But most of the Chelsea tractors would vanish when they no longer won cachet for their owners, replaced by little sports cars that are more fuel efficient and probably heaps more fun to drive anyway.

So if we could agree that's what we really want - for people to voluntarily choose to drive the lowest-impact vehicle they can - how can we bring it about? Well certainly not by deflating the tyres of thousands of 4x4s. We need to think this through. The future of the human race is at stake and we can't rely on sound bites and quick-and-dirty analysis to figure out what to do. What is actually causing the damage? Is it vehicles whose drivetrain sends power to all four wheels simultaneously? Or is it humans whose carbon footprint is outsize? I hope this post is not misunderstood. I am not trying to defend 4x4s in particular. I am trying to attack simplistic approaches to environmental activism. Because I care very deeply about environmental activism and it p*sses me off when we're made to look stupid by our own side.
Posted by Melanie Rimmer at 10:44 am

Excellent points and so well written!

Well said, Melanie. Although you have to admit, you can tell the difference between a farmer's 4x4 and a Chelsea tractor - something to do with the mirror finish on one and the non-designer mud on the other ;)

My husband has an AWD Subaru that gets decent gas mileage. His vehicle is the only one that can get in and out of our driveway in the winter snow. He works in town and would be highly infuriated to find his tires deflated.

I can never understand why anyone on any side of any issue thinks that they can convince people of their point by pissing them off?

It's pretty much been a full year since I ditched my car and we became a single car family. My wife kept her Smart, as she works out in the middle of nowhere, and I catch the bus daily. In an entire year, there's only been a single occasion when I've missed not having a car of my own (and it's nice to be able to lie back on the way home and listen to the radio, leaving the traffic jams for somebody else to worry about!)

Erm, our LR Defender does have a mirror finish - on the right-hand side. I buffed that side up two months ago and never got around to doing the other.

It probably makes it both a Chelsea tractor and a farmer's truck!

Anyway, you can live on the side of a mountain and not use a 4x4. I actually ride a Kangaroo trike most of the time on a trip that takes in a 1-in-10 slope. It's hard work but do-able.

Also, don't forget that we country folk need to come to the city every now and again - and public transport is not always available from out here or best suited to task at hand. Try carrying a washing machine onto a train...

But as you say, it comes down to context. Using any large and fuel guzzling vehicle for a trip that should be done in something smaller and more economical should be anathema.

Using a smaller vehicle for a trip that could be done on public transport, by cycle, on foot - or even on horseback - should be anathema.

And if anyone tries to deflate my tyres, I'll insert the tube to my high-pressure compressor into a suitable orifice and commence inflating!

I sooo agree with the premise of your argument. I fear that many people are more concerned with appearing to be environmentalists these days than actually using common sense to figure out what is actually the most ecologically sound choice.

I don't know much about cars because I don't have one. But my example would be plastic bags. I carry used ones with me everywhere I go. I've collected them from neighbors and friends who would have discarded them. They are very handy to keep in my backpack or purse in case I happen to go shopping unexpectedly and don't have my reusable shopping bags with me.

Now, I'm very aware that I don't look like a proper environmentalist if I walk down the street carrying a plastic bag. But I know that I've already used that bag 5 other times and that I'm saving energy and resources by using it as many times as I can before recycling it.

I wish people would stop to consider the true impact of their actions rather than worrying about how they look to others. I can think of many, many resources that could be saved if people lived that way.

trucks are bad because they are higher than other cars and will crush them. they should make them lower for the city and higher for the dirt. It costs 1000$ to lower a truck but it saves many lives.
The problem is the car companies love how fear gets people into buying bigger trucks and therefore they keep on getting bigger and more dangerous.

Poor mud tires ! They got all the bblame from the 4x4 protesters. I think it's important that these group look at the other advantages of 4x4's before they deflate another tire

with proper diesel performance product installed in your truck it can surely be more fuel efficient compare to other smaller type of cars and there are other ways to make your truck greener, that's why i dont agree that 4x4 drivers are the bad guys.