Weed of the Week - Ground Elder 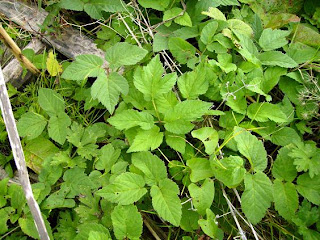 There are actually quite a few weeds in this photo - the eagle-eyed will be able to spot bindweed, creeping buttercup, couch grass and dock. But the most prominent weed here is ground elder.

Ground elder is a flipping nuisance due to two bad habits. The first is its habit of making a tangled mass of thick but brittle roots just below the soil surface. It is quite easy to remove huge quantities of these (unless it is growing amongst established plants, in which case it is an absolute bugger), but very difficult to remove every last piece. You will always leave bits of ground elder root behind. This leads us to its second bad habit - it can quickly and easily regenerate from even a tiny piece of root. In combination, these two habits make ground elder very hard to eradicate.

It seems to defy mulches, horticultural plastic, old carpet etc. It just pushes straight through, or find its way around the edges. I've never tried weedkiller on it but it has a reputation for shrugging herbicides off. The stuff does have the most astonishing will to live. I sometimes wish my crops showed such strength of character.

Ground elder was deliberately introduced to Britain as a food. I would dearly like to go back in time, find the person who did this (a Roman apparently), and beat him up. Apparently the young leaves can be boiled as spinach. I can't say I've ever tried it. In my opinion almost any leaves can be boiled as spinach, but whether it's worth the bother is another question. I must admit that there's a slight appeal in the thought of eating it as revenge. Ground elder has also been used as a remedy for gout, and in some places it is known as goutweed. It was introduced to Northern Europe in the middle ages by monks, who suffered from gout terribly. I'm not sure why mediaeval monks were particularly susceptible to gout, which is commonly associated with overindulgence in alcohol and rich foods, but there you are.

It doesn't spread as fast as some other weeds, such as bindweed, and so I am satisfied to dig it out of new beds and hoe it ruthlessly off established beds when I see it. I am especially ruthless near my carrots. It's a member of the same family and so can host carrot root fly. Of course, the flies don't do any harm to the flaming ground elder, but they make delicate lace doilies out of my carrots. This method is the same as advocated by Bob Flowerdew, who says you should go out every day and pull off every leaf of ground elder you see. Sooner or later you will exhaust the rootstock. Good luck.

My verdict of ground elder - it's a pest but there are worse things. Maybe I will try eating it. And whilst it flourishes on my allotment, at least I have nothing to fear from gout.

Posted by Melanie Rimmer at 7:25 pm

Hello ! Thanks for stopping by my blog, you are welcome anytime ! I am going to have to come back and read more of your when I have a bit more time !! Looks sooo interesting ! I'm a beginner gardener and truth be told my little veggie patch isn't doing so well. Herbs I can grow. They are amazing ! Veggies ... not so much ! But I'll keep trying ! Maybe I'll learn some thing from your blog !!! I'll be back !!

Probably an idea for you to start eating lots, in anticipation of all the wine you're brewing at the moment.

If you pick them young, ground elder leaves are quite nice in salads and done like spinach. I used to eat quite a lot of them. In fact, I used to make salads for my employer of the time basically by weeding the garden, and finishing it off with nasturtium leaves and flowers.

There was a comment on Gardeners Question Time a while ago on ground elder - how about ground elder omelettes?

I've had good success with digging out as much as possible then planting marigolds (tagetes) all over the area. Worth a try - at worst you'll have some lovely splashes of gold among the green...