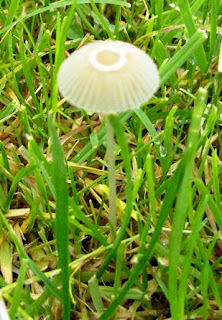 I picked some more shaggy ink cap mushrooms from the field at the end of the road. I also found three other types of mushroom, but I could only identify one.

The one I'm pretty sure of is a Little Japanese Umbrella (shown top left). It's supposed to be edible but they're so titchy it's hardly worth the bother. They're also really pretty (my blurry photo doesn't do it justice) so I'm happy just to admire them where they are.

I also saw lots of these little white mushrooms (centre right). They were perhaps a couple of inches across, pure white caps and gills, the gills running down the stem like a chanterelle. Again, my photo is poor - the gills are quite widely spaced and they fork. Some of the caps had a smooth round edge but some had a "toothed" appearance where the cap had begun to decay leaving the gills sticking out. Since I didn't know what they were I left them alone.

The last type of mushroom I saw (bottom left) might have 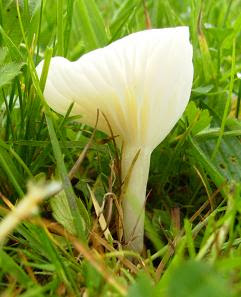 been almost any type of large brown mushroom. They were so degraded it was hard to tell. They were the largest mushrooms I saw, about four inches across. There were a fair few of these, and they must have been pretty substantial before they started to rot away. So if they are edible they'd be very worthwhile to collect.

It's not very satisfactory standing in a field trying to flick through a large book comparing pictures without any clue how to narrow down the options. A few times I thought I had a candidate only to learn that the type of mushroom pictured only occurs in birch forests in the spring, not in fields in the autumn. Or a picture that looked very similar in the book turned out to be a super-magnified close-up of a 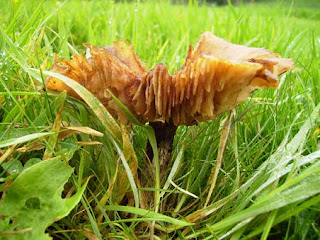 mushroom that is millimetres across, not a few inches like the mushroom I am looking at.

So if any more knowledgeable readers can suggest what these mushrooms might be, if I spot them again I'll try to compare them to that suggestion. I know you can't identify mushrooms by a picture only, so I won't do anything stupid like eat them just on the basis of some stranger on the internet saying "They look like chicken-of-the-woods to me". But it would give me a point to start. At the moment I am floundering.
Posted by Melanie Rimmer at 9:45 am

Email ThisBlogThis!Share to TwitterShare to FacebookShare to Pinterest
Labels: foraging

Have you come across the British Wildlife Forums yet, Mel? They have a -lot- of "can anyone identify this..?" photos on everything from insects to mammals to plants and a bunch of people who seem very knowledgeable. And they have a fungi section. They are very keen to warn people not to base their provisional menus on their guesses, but will have a go at narrowing down the identification for you.


http://www.wildaboutbritain.co.uk/forums/fungi-forums/
Some of the other sections are fascinating - have a look for the giant wasps' nest in someone's attic. There are the most amazing photos. I am not keen on wasps in numbers any greater than one at a time, but the patterns on the nest are beautiful!

That's exactly what I was going to suggest. Some of the pictures on "WAB" are absolutely amazing. There's one of a fungus that looks like marshmallows with strawberry jam!

I borrowed a book from the library called: "Food for Free", by Richard Mabey ISBN: 13:978 0 00 724768 4
Lots of pages of pics of fungi with descriptions.
Personally, I'd be too afraid to try any of them, but my French friend is always on the lookout, especially at this time of the year.