Weed of the Week - Creeping Buttercup 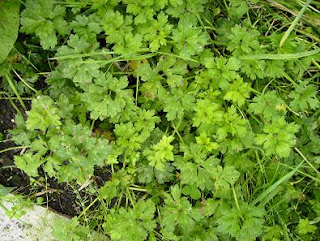 This is creeping buttercup. There aren't any flowers in the picture but the flowers look like familiar buttercups.

It's not such a problem in vegetable gardens because it isn't hard to dig out. You've got to dig it up - if you dig it in, it will just regrow. But if it gets in a perennial bed such as a flower bed, or in amongst your asparagus, it can be a nuisance. It spreads by long runners from the parent plant. New plants grow where the runner touches the ground. Each plant grows from one central growing point and I'm told that as long as you remove that, it won't regrow from any roots you leave behind. That's the crucial piece of knowledge that makes creeping buttercup much easier to deal with than other weeds with regenerative roots.

Wear gloves when you're dealing with it, as the sap can cause blisters if it gets on your skin. Apparently medieval beggars used it to raise sores on their feet to get sympathy. It's also poisonous. If it can make the skin of your feet blister, you can imagine that you really don't want it in your mouth, oesophagus, stomach etc. I've heard that it depletes potassium from the soil, and kills neighbouring plants.

Sounds pretty unpleasant doesn't it? But it's not really that tricky to deal with so it's not in the same category as ground elder, for example, or bindweed. As weeds go it's not that evil. But don't forget your gardening gloves.
Posted by Melanie Rimmer at 9:25 am

You could always do what a bloke at Bedford Market did once.. pot up the runners and sell them off under their Latin name.. "ranunculus repens" sounds so much posher than "creeping buttercup"..

Excellent post - I've been cursing this stuff in my vege patch and not knowing what it is (although was picking the buttercups in it's vicinity yesterday and now I know where exactly they came from!).