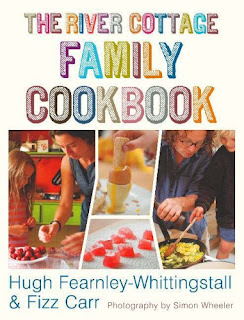 Yesterday I mentioned that my homemade sourdough starter is made with instructions from Hugh Fearnley-Whittingstall and Fizz Carr's The River Cottage Family Cookbook. There's only one thing I don't like about this book - the title. It sounds like a kids' cookbook - you might assume it has lots of recipes for pink cakes and pizza with the toppings arranged to look like faces. If you don't have kids, you'd probably never think of buying this book. Big mistake.

If they'd asked my advice, I would have advised Hugh and Fizz to name the book "The Campaigning Real Food Book For People Who Want To Learn What Food Is For And How To Work It". OK, maybe "The Family Cookbook" is snappier but my title is far more accurate.

To show what I mean, these are the chapters of the book:

Each chapter starts with a discussion about what the ingredient is, where it comes from, what does it do. The authors want you to understand these ingredients, to grok them, because that's by far the easiest and most direct way to make you a better cook.

There are recipes, too, and they're great recipes. The emphasis is on family-friendly British home-cooked food, often with a twist. It's not trendy restaurant or dinner party food. But don't get the idea it's all been-there-done-that. I loved the sweet redcurrant and chili jam - it's the best accompaniment to cold meats ever. The creamy Brussels sprout gratin lives up to the promise in the text:

Some people think they don't like Brussels sprouts. This recipe should change their minds.

Green peas with roasted red peppers and chorizo was another eye-opener. But it's true that most of the recipes are for workhorse dishes - rice pudding, scones, bread, burgers, fish pie, roast chicken. Maybe you already have your own recipes for these things, or maybe you tend to buy them ready-made from the supermarket. The Family Cookbook would be a great book to give to a student or a young person leaving home for the first time. And it would also be valuable to a non-cooker who wants to learn how to cook the food they like to eat, with delicious no-fail recipes.

But my favourite thing about this book is the projects. These are a bit different from recipes. Some of them take several days. Some of them involve making an ingredient from scratch, rather than making a finished dish. All of them are fun and very educational. The sourdough bread I'm making at the moment is a project from The Family Cookbook. The butter we made a few months ago was another. I keep meaning to get around to the "make your own bacon" project. I know Steph has tried the "make your own sea salt" project, although when she realised she had collected the seawater close to a sewage outfall, she binned the results.

I give this book five stars out of five. I have bought it for other people, and I have talked other people into buying it for themselves. I use it as a reference book as often as I use it as a recipe book. If I was forced to whittle my recipe book collection down to just five books, this would be one of them.

Posted by Melanie Rimmer at 9:23 am

I've always thought "Family Cookbook" was spot on as the title. There is a lot of useful stuff for (alleged) grown-ups, while children love the recipes and photos.

We use ours together, as a family, and I'd also give it five-stars.

I've been meaning to get that book for ages, it looks amazing and you've just made it my priority to get it as soon as...

I think this cookbook is fantastic and always recommend it to people. I love the little investigations and how it explains all the different ingredients.

I fifth this motion. It's in my top three of cookbooks in fact. Mel, what are your other 4 top cookbooks by the way?

Oh no! I just passed up the opportunity to buy it in WHSmiths for a fiver because I thought it would be full of things for children (and that would put the fear of god into my boyfriend).... Dammit!