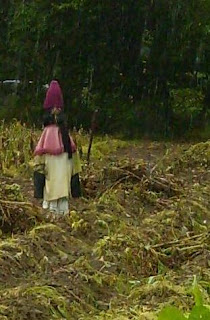 We had big plans for the allotment in 2007. Early in the season we were given part of the plot next door, and I hoped to dig it all over and fill it with three times as many crops as we grew last year.

Sadly, the weather had other plans. Following a deliciously warm and dry spring, Britain had the wettest summer in recorded history. Throughout May, June and July it just rained, heavily, every day. The slugs and snails ate the crops we had already planted. The weeds grew unhindered. And even when the weather broke, we just didn't feel like going down to the allotment.

It wasn't all doom and gloom. The allotment was a patchwork of productive areas interspersed with weeds.


What about next year? We've got to be really disciplined and get to the allotment more often, whatever the weather. When we've weeded an area, we need to plant something in it straight away. Crops are a great weed suppressant, especially leafy things like potatoes and squash, but bare earth is an invitation to weeds. But to look on the bright side, even in a terrible year as this has been, there's always something. There have been times when I've despaired of the allotment, and yet if you add together everything we've harvested, it's not bad at all. The shed has dozens of bags of spuds and ropes of onions hanging from hooks in the ceiling. I've got 20 gallons of wine fermenting from plants we foraged or grew. I think every meal I've eaten for the last week has been mainly or partly home-grown food. That's not too shabby. Not too shabby at all.
Posted by Melanie Rimmer at 11:11 am

Email ThisBlogThis!Share to TwitterShare to FacebookShare to Pinterest
Labels: allotment

Despite the failures, you sounds like you did really well! I'm hoping for the same sort of success - but who knows, I've already had a few knockbacks, but they're all good really and full of learning blah blah...haha.

I had the same issue with my garlic -- only one clove instead of a whole head of cloves. After doing a bit of research, it seems you need to plant them in fall, so they can overwinter, then grow come spring... the cold conditions tell the clove to separate into many cloves. Maybe next year we'll both have better luck!

Here over in the US (in Ohio) we had a bad drought. Hay prices here are REALLY high so feeding the animals this year isn't going to be a bill I want to see.