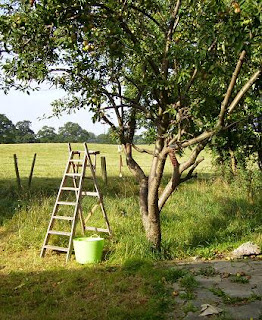 After asking around I found two neighbours with apple trees who didn't want their apples. So at about half past nine I walked up the street with a ladder in one hand and a plastic trug in the other. It was a glorious autumn morning, bright and clear. I thought it was quite warm, but someone nearby was obviously feeling the cold and had lit a coal fire, so the smell of smoke pervaded the crescent.

I picked about 120lbs of apples from this one tree. There are more apples but I thought I had enough work to do processing this lot, so I'll come back for more later.

I took them home in a borrowed wheelbarrow and washed them. Then, just as yesterday, I set up in the garden to quarter, crush and press the apples. What none of the books tell you about cider making is that you'll soon be surrounded by more wasps that you have ever seen in your life. So I beat a hasty retreat to the house, and will have to retrieve my apples and equipment later, when it gets cold and the wasps go away.

You are a non-stop woman!
Wish I was there to help:)

birdie said "You are a non-stop woman! Wish I was there to help:)"

Get a real one from www.trugs.net

They're beautiful, anonymous, but I can get about 40lb of apples in my plastic trug. None of the trugs or baskets at www.trugs.net can carry that.